The Treaty of Versailles marked the 90th anniversary on June 28. It was one of the peace treaties that were signed at the end of World War I. Official spokespeople for the USA, Britain, France, Italy and several other victor powers signed the treaty with the defeated country, Germany, on June 28, 1919 in the suburb of Paris. 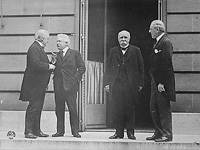 The Germans were deprived of all their colonies that were distributed between the victor states. Germany returned Alsace and Lorraine to France. A part of Germany’s territory was ceded to the restored Poland. A 30-km area along the Rhine was supposed to be demilitarized completely. Millions of ethnic Germans were left in Poland, Czechoslovakia and Yugoslavia.

Germany was allowed to have the 100,000-strong army of ground troops only. Most of the German navy was delivered to the victor powers. The ownership of military hardware was forbidden; restrictions were imposed on the construction of new warships. Germany was supposed to pay indemnities to the winners before 1988.

The Germans perceived the Treaty of Versailles as a national humiliation. The treaty triggered the development of vengeful sentiments in the country, which helped Nazis come to power in Germany in 1933. Their intention to get rid of the chains of Versailles resulted in WWII.

Russia could also be among the victor powers. Russia was waging war against Germany together with France and England. However, Russia’s Bolsheviks pulled out from the war in 1918 and were not going to send their delegation to Versailles. They could not do it at all: there was no country in the world that would recognize the Bolshevik government at that moment.

Russia’s White Movement tried to participate in the conference at Versailles, but they were not allowed to do that. As a result, the treaty became a humiliation to both Germany and Russia.

Pravda.Ru interviewed Natalia Narochnitskaya, a member of the governmental committee for struggle against the falsification of history, about the Treaty of Versailles and its consequences.

“Speaking about the treaty, one should bear in mind the fact that it was the time of the big geopolitical struggle. The Americans were not intended to view the Western Hemisphere alone as the zone of their interests, like it was before. The USA and Britain were dictating their will to the rest of the world. The defeated nations were trampled – they were deprived of their colonies and had the fundamental state attributes, like the army, diminished. Germany was allowed to have a toy army only.

“Britain started watching Germany in the middle of the 19th century. London realized the danger that the united Germany was posing. The British government was trying to direct its aggressive ambitions to the east. The same was happening after Hitler’s rise to power.

“The West did not let Russia participate in the conference, which meant that the Western countries were not interested in Russia’s revival and did not want to share their victory with anyone.

“The Americans did not want to recognize Russia’s White Movement as an equal partner. In general, historians do not know much about the backdoor games at Versailles. The fact that Russia and Germany found themselves beyond the treaty predetermined the beginning of WWII. Lenin was absolutely right, when he said that the Treaty of Versailles became the prologue of a new global clash on the planet.”