The session of the Parliamentary Assembly of the Council of Europe (PACE) is closing in Strasbourg on Friday. This session may become the last one for the Russian delegation. Russia may be deprived of the voting right in Europe’s largest organization already this autumn or winter, the chairman of the Committee for International Affairs of Russia’s State Duma, Konstantin Kosachev said. 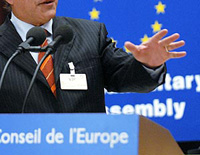 The Kremlin has repeatedly said before that Russia would be ready to leave the Council of Europe in case the organization introduces such a sanction. If it happens, Russian citizens will not be able to address to the European Court for Human Rights to appeal the decision of Russian courts and authorities. For the time being, Belarus is the only country in Europe which does not hold the PACE membership.

PACE did not discuss the consequences of the war between Russia and Georgia, which took place last summer. The full-scale discussion of the issue will take place during the next session in autumn.

Georgia’s delegation was collecting signatures at the Palace of Europe to deprive the Russian Federation of the voting right. Georgian officials claim that Russia does not meet many requirements of PACE’s resolutions. For example, the Council of Europe demanded an independent investigation be filed into the events of August 2008 and Russian troops be pulled out from the region. To crown it all, PACE offered Moscow to decline its recognition of Abkhazia’s and South Ossetia’s independence.

The Russian delegation at PACE says that those requirements are provocative and unrealizable.

“I’m afraid that there is a big conflict looming in the future. It will be a different discussion. They used to discuss whether Russia was right or wrong, but now they will wonder whether Russia executes the resolution of the assembly or not. We can not demonstrate the execution of any of those decisions because we originally disagreed with them,” the head of the Russian delegation at PACE, Konstantin Kosachev said.

Many Russian politicians say that Russia does not have to stay at the Council of Europe and listen to criticism over the over again. Mr. Kosachev said that Moscow may decide to pull out from the organization once PACE deprives Russia of the voting right.

Mr. Kosachev added that the Russian delegation had a thought-out plan to struggle against the attempts to deprive Russia of the voting right at PACE. The official did not clarify any details of the plan, though. However, the position of the Russian delegation at the Council of Europe may improve considerably if a Russia-friendly person chairs the board.