Greenland to become 51st state of the United States

Greenland, the world’s biggest island, made an important step towards its independence on June 21. The island, which is presumably populated by the Eskimos, has been a part of Denmark for over 300 years. The Parliament of Denmark passed the law to expand Greenland’s autonomy at the end of May. 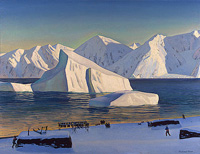 Greenland to become 51st state of the United States

The law asserted the results of the referendum which took place in Greenland last year. About 75 percent of the island’s 63,000-strong population supported the idea to expand the self-administration on the island with 23 percent voting against it.

The new status, which the island will obtain, will give the Greenlanders a right to manage the natural resources of the island. The local authorities will also be able to solve the issues of the judicial and the law-enforcement systems and to partially control Greenland’s foreign politics. The authorities were previously in charge of the island’s healthcare, school education and the social servicing of the population. The majority of Greenlanders are presumably employed in the fish-processing industry.

However, it is too early to speak about Greenland’s independence. Oil is the corner stone of the issue: there are billions of barrels of oil near the island’s coast. Permafrost used to be the major obstacle for the development of the oil industry in Greenland. However, ice continues to melt in the region because of the global warming phenomenon, which opens new horizons for world’s oil giants.

The agreement about the expanded autonomy says that the first 14 million dollars of oil sales revenues will be transferred to the budget of the island. All other revenues will have to be shared 50-50 with Denmark. In addition, Denmark will continue investing in the local economy - $600 million a year (which makes 30 percent of Greenland’s GDP) – until Greenland is able to extract oil in the sum of $1.5 billion.

Many in Denmark believe that the Greenlanders are not ready for their independence. It’s not for the high level of social problems, alcoholism and suicide rate. The majority of Greenland’s qualified specialists come from Denmark. The gap between them and the culture of hunters and fishers is too large.

There is another relevant reason which puts Greenland’s independence into question. The island may quickly become the 51st state of the United State if it acquires sovereignty. The White House has been showing interest in the island since the 20s of the 19th century.

Greenland plays a very important role for the US administration to control seaways in Northern Atlantic. The USA acknowledged Denmark’s sovereignty over Greenland in 1917. However, the United States did not intend to forget about the biggest island in the world. US military objects were deployed there during WWII. The airbase of strategic bombers, the network of radars and other objects of the US missile defense system still play a key role in the region.

The US military presence is not something that the local population welcomes with open arms. However, the United States pays a very good rent, which makes up to 20 percent of Greenland’s budget. The Americans are ready to use their army bases in Greenland to access the oil-rich shelf of the island. Therefore, it would be extremely good for the United States to get rid of its regional competitor – Denmark.

Denmark does not intend to refuse from such a big piece of the pie despite its friendly terms with Washington at NATO. Copenhagen decided to expand Greenland’s autonomy to relieve itself of excessive spending. Denmark invests millions in the island and receives nothing in return for 300 years.

Denmark has already tried to explore the shelf of Greenland. The nation sent a polar mission to the Lomonosov Ridge to prove that the ridge was the continuation of the shelf of Greenland, but not Russia. Therefore, the expanded autonomy of the island is only a tactical step. The struggle for the Arctic resources is just getting started.