America walks the road of collectivism

Dear reader, let us first and foremost establish a known fact as our guiding principle: the Principle of American Extremes. 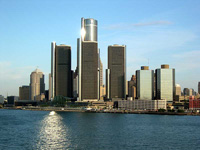 America walks the road of collectivism

Simply put, in the American culture and government, any law passed and program enacted will be taken to the absolute extreme. Note, I do not say logical extremes but absolute extreme, beyond any measure of logic or hint of common sense or wisdom.

Last week, an interesting story broke in the major UK paper called The Independent. The article described the new American initiative, started on a small scale but now championed by president Obama and taken to the whole of America: shrinkage of cities. How will cities shrink? Why through force of government and the demolition work, how else?

Our story begins in Flint, province of Michigan and formerly home to 200,000 people back in the 1960s. This suburb of Detroit, a satellite industrial small city, located only 90km from Detroit, has been shrinking along with its parent. The city's population is now approximately 115,000 people, or just about 60%. Obviously there are a lot of empty places in Flint, as well as Detroit and other cities, as American ideologues pushed the Marxist plank of Free Trade and destroyed the middle class that used to live there. This serves as the prime example of why Russia took the way of protectionism in the late 1990s and 2000s and grew its middle class, tripling the average income, but I digress. Back to Flint.

In Flint, over 1,100 homes have been destroyed and the government, through Imminent Domain, has "purchased" 3,000 more, slated for the same end. Why I state "purchased" is because in America, the government has a right to snatch property from its owners and pay them a "fair market" price, that is, one that the bureaucrats set themselves as fair. What plans the owner had of these "blighted" areas is not taken into account. The Soviet Union had laws like that, well actually, since the Soviets owned the land they did as they pleased with the buildings and private property on it, for the betterment of the State of course. Russia now has laws, though far from always enforced, to protect private property, which also can not be taxed, only the buildings built upon that private land can be taxed, never the land. Again, I digress. Back to Flint and as such, Dan Kildee, treasurer of Genesee County (where Flint is located) has decided that for Flint to survive, it must shed, that is destroy, 40% of its buildings...controlled shrinkage.

This plan has now caught the attention of the federal government, and specifically president Obama. After further study by what are termed "think tanks" which supposedly think through problems but actually seem to be little more than sophisticated and slick propaganda machines, whose views are purchased, fifty American cities, primarily in the old industrialized northern regions, are now slated for shrinkage.

The most radical will be Detroit which will be turned into five small towns and all the area between destroyed and returned to forest. Detroit, known as Motor City, was the American capital of the now government owned auto industry. At its height, the city boosted over 2 million residents but is now a run down ghetto of less than 700,000 people, with a huge Islamic population. The community centers around which the new mini-Detroits will be built, will be even more ghettonized than the present day city. These will not be quient German villages or towns, but Soviet style barracks cities, built to service a specific plant or factory. Rows upon rows of sterile apartment buildings for the working serfs, is what I predict. Visit places like Konotop, for an example. Maybe this is how the new Government Motors will survive competition with competent foreigners? I am sure an atheist Culture Center or Palace of Culture will stand in the middle of each.

Other targeted cities, according to Brookings Institution, are Philadelphia, Pittsburgh, Baltimore and Memphis.

The Digital Journal was even quoted as toting one of the benefits of destruction: "In a curious benefit to the environment, dozens of American cities are slated for shrinkage planning in the face of the deep recession and urban flight. Entire neighborhoods could face bulldozers."

Two things can be deemed from this:

One, this is an out and out admittance that the US is done and those industrial zones will never return and the empty factories will never be filled, thus the city infrastructure that supported them and was built around them is no longer needed.

Two, this is the first massive steps to full Marxist collectivism and the production of an almost free labour pool for huge government building projects.

As tens of thousands of Americans, daily, loose their houses and join the ranks of the homeless and Bernankivilles spring up all over (and these tent cities are now a fixture of Japan too) housing stock is being destroyed. Thank Christ, Russian never suffered from this particular blight during the Depression of the 90s. Soon, following our initial established fact of American extremism, this homeless labour will be used to construct the barracks/mass housing ghettos of the new Obama cities, as well as provide almost free labor for other great projects of the people.

Why hold a gun to the peoples' heads and force them to work and to often die on ill conceived massive government projects? This was a model of Soviet inefficiency and bred rebellion to be suppressed by expensive and resource consuming terror. The American model is much more progressive and has learned from the mistakes of their Soviet proxies. It is much more efficient to absolutely impoverish a population until tent cities look and feel like a norm and than give them a "God" send of these national projects with extremely low pay and dangerous working conditions. They will flock to it, sacrificing life and their limbs with not a protest, considering themselves lucky to have any pay at all. Thus are willing slaves made.

Mistake this not, this shrinkage plan and its actions are absolutely nothing short of the initial steps of Marxists collectivism, which has only one conclusion: absolute control of the masses and liquidation of private property rights. All this is done with a smiling face and encouragements that this is critical for your survival and your childrens' futures. Well, it will be a smiling face at first, followed by a sharp bayonet, later.