Russia's alliance with Belarus may lead to war

Belarus needs to look right and left for danger, like a pedestrian at a crossing, the nation’s President Alexander Lukashenko said describing the relations between Russia, Belarus and Europe. 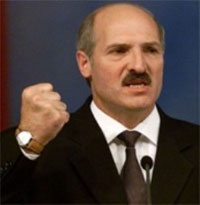 Russia's alliance with Belarus may lead to war

Lukashenko believes that his country must use its geographical positions – between Russia and Europe – to the utmost. This is the resource, which the nation received from God, Lukashenko said.

“The Belarussians have only this resource, as well as their hands and minds. This is all the Belarussians have. No one has ever passed us by because of our position. They built roads and channels from the west to the east and from the north to the south. Belarus is the intercrossing of all those roads – pipelines, air traffic, etc. This must bring good for our people,” Lukashenko said.

That is why, the Belarussian president added, Minsk decided to join EU’s Eastern Partnership program in addition to its cooperation with Russia.

Alexander Lukashenko said that it was Russia that forced Belarus to develop closer ties with the West. It particularly happened because of Russia’s trade policies, when Russia closed some of its markets for certain kinds of Belarussian goods.

“Prices on sugar have grown by 40 percent in Russia recently. I was shocked to learn about it. This is a crime against people. Why did Russia close its market for the Belarussian sugar? If they had enough sugar on the market, there would be no such price. Afterwards, they gave us a quotation of 150,000 tons. Russia imports 7 million tons of sugar. What is 150,000 against 7 million ?” Lukashenko resented .

Russia and Belarus cooperate in the defense industry as well. “There is not even a soldier to the west off Moscow. What would happen if there were no Belarussian army in that direction? What if, God forbid, Belarus would take a course aimed at the European security, NATO, like Ukraine did?” Lukashenko exclaimed.

The defense cooperation between the two countries is far from being perfect either. Belarus is particularly concerned about the arms prices, which Russia intends to offer to its neighboring state.

“I am asking them – sell these arms to us at Russian prices. They tell us – you pay like everyone else does. It looks like Russia wants Belarus to defend Moscow with bare hands, the Belarussian leader said.

As for the unification of Russia and Belarus – the question that has been gaining so many words and so little action – leaves much to be desired too. The realization of the ambitious plan may result in another Chechnya of the 1990s.

“Many people say that Belarus must become a part of Russia. Ok, but we, like leaders, must foresee the possible consequences. Let’s assume that I make such a decision. What is going to happen tomorrow then? We have many rascals here who would be willing to unleash a national liberating war. They only need a reason for it. They will have weapons delivered from Ukraine, the Baltic States, from Poland. Many Belarussians think just like Russians: this is our land, this is our country and we will not give it away to anyone. This would also be the end for Lukashenko and for everything that he has done here. The empire must rise on new, modern principles. The empire in the finest sense of the word,” the Belarussian president concluded.