North Korea’s leader Kim Jong-Il named his younger son, Kim Jong Un, his successor. Jong Un reportedly enjoys skiing and studies of English, German and French at a school in Switzerland. The age of Kim Jong-Il’s successor is not known exactly (he is reportedly 26). Moreover, it is not known whether the information about North Korea ’s next leader is true to fact. 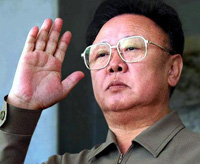 South Korean intelligence said that the statement about the successor to Kim Jong-Il was made on May 28. However, as it usually happens with North Korea , the information transpired only several days later. There can be hardly any information found about Kim Jong Un – even his birth date is unknown. His photographs have never been published anywhere .

It was only said that Kim Jong Un had the privilege of leaving his native land. He finished an international high school in Switzerland and returned to his home country afterwards to study at a local military university. He is reportedly a fan of basketball.

South Korean intelligence said that the information about the appearance of the official successor in North Korea had been sent to the leadership of the Korean People’s Army, to the presidium of the Supreme People’s Assembly of North Korea and to the nation’s ministers.

It is not the first time, when Kim Jong Un makes headlines in many news publications all over the world. He was born from Kim Jong-Il’s third wife, who died of breast cancer in 2004 at age 51.

The talks about Kim Jong-Il’s successor emerged after it became known that the long-time 66-year-old national leader had serious problems with health. It was particularly reported that Kim Jong-Il suffered a stroke in August of 2008. He did not attend the national celebrations in September, which led to even more rumors about his physical condition. North Korean officials say that the rumors about the ailment of their leader are not true.

It is not known of course, if Kim Jong-Il made the final decision about his successor. It is not ruled out either that the latest news about Kim’s younger son is just a hoax.

If Kim Jong Un takes the leadership in North Korea indeed, the whole world will wonder how the years of his experience in Europe may affect the nation’s home and foreign policies.