Israel wants Russia to dance to its tune

“Stop supporting terrorist groups and giving weapons to the rogue states,” Israeli Foreign Minister Avigdor Lieberman said during his official visit to Moscow. The leader of the Yisrael Beiteinu Party, whose electorate mainly consists of immigrants from the former Soviet Union , stated that Israel would otherwise ruin the Middle East regulation conference. 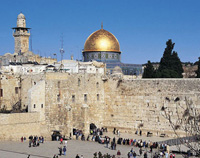 Israel wants Russia to dance to its tune

Lieberman’s visit to Moscow lasts from June 1 to June 3. The Russian-speaking official will have meetings with his Russian counterpart Sergey Lavrov, Prime Minister Vladimir Putin and President Dmitry Medvedev.

What does Lieberman want in Russia? Pravda.Ru asked this question to Israeli political blogger Ilya Dubinsky.

“Lieberman will try to prove that Moscow’s ties with Hamas and Hezbollah administrations cause damage to the peaceful regulation of the conflict in the Middle East. The second question is connected with Russia’s defense links with the countries that support terrorist groups – Iran and Syria, first and foremost. Israel is highly concerned about Russia’s arms deals with these countries because Kornet anti-tank systems, which Russia sold to Syria, were later found in Lebanon in the hands of Hezbollah fighters,” Dubinsky said.

Lieberman will thus try to convince Russia of the need to put an end to any arms deals with Iran and Syria , which run Israel-unfriendly politics. First and foremost, it goes about the delivery of Russia’s S-300 systems to Iran and Iskander missile complexes to Syria.

It is worthy of note that Lieberman will travel to Belarus after he completes his visit to Russia. He will visit Minks, Belarus’s capital, for two days to meet the country’s President Alexander Lukashenko.

It will be the first visit of a top Israeli politician to Belarus in ten years. Tel Aviv is seriously concerned about the fact that Belarus has been developing ties with the rogue states too. The Israeli administration believes that Belarus is willing to participate in the transit of the S-300 and Iskander systems from third world countries. Lieberman will try to talk Lukashenko out of such an opportunity promising a financial profit and closer ties with the European Union.

Several days prior to his visit in Russia, Lieberman released harsh statements about the meeting between Russian Foreign Minister Sergey Lavrov and Hamas leader Khaled Meshaal, which took place on May 23 in Syria’s Damascus. Avigdor Lieberman stated that such meetings were legalizing terrorism.

The Israeli foreign minister said that he would ruin the Moscow-based conference for the regulation of the Mideastern crisis if Hamas or Hezbollah officials were going to be involved in the event either directly or by implication.

He also stressed out his negative views about one of the key conditions, which Arabs set out for the peaceful dialogue. They want Israel to retreat to the borders, which the nation had in 1967. Israel seized a part of the Arab territory during the war of 1967 and still keeps some of those territories claiming that the country needs them for security reasons. It goes about the Golan Heights, which previously belonged to Syria and the lands on the West Bank of Jordan.

Lieberman says that the precedent with the south of Lebanon and the Gaza Strip is enough. Terrorists used those territories after Israel pulled out from there. He emphasized that Israel was ready for the peaceful dialogue with the Palestinians only if the latter strictly abide by the Road Map plan, the idea of which appeared in May of 2003. The plan stipulated the co-existence of the two states – the State of Israel and the State of Palestine. All hopes for peace went up in smoke after a series of bloody terrorist acts, which Palestinian terrorists committed in Israel.