Latin American fighters against American imperialism announced their yet another victory. The members of the Bolivarian Alternative for the Americas (ALBA) decided to introduce the regional currency for mutual settlement, the Sucre (Sistema Unico de Compensacion Regional). The new currency is to be put into circulation from January 2010. Experts are not certain whether the idea to “bite the USA” can become an advantage in such a complex undertaking. 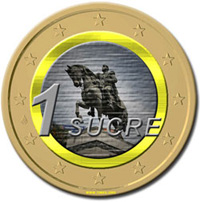 For the time being, the Sucre bears a resemblance to Europe ’s ECU (the European Currency Unit), which was a virtual currency before the introduction of the euro.

The first joint Latin American currency is a victory for Venezuelan President Hugo Chavez and his allies in Cuba. The two countries founded the ALBA in 2004 to oppose Washington ’s idea about the creation of the free trade zone for the two Americas.

The ALBA follows the practice of the international barter exchange. For example, Cuba provides its specialists for Venezuela’s social programs in return to Venezuela ’s oil shipments to the country. In addition, the members of the organization receive Venezuelan oil at discount prices.

The dollar peg became a weak point of the organization, but the new currency is expected to remove the political and economic risks of the dollar-based turnover. Hugo Chavez said that the Sucre would be launched as a virtual currency and would then proceed as a full-fledged regional currency, which would help Latin American countries forget about the dictatorship of the US dollar.

It is hard to describe the ALBA as a strong organization. It unites Venezuela, Cuba, Bolivia, Honduras, Nicaragua and Dominica. Ecuador acts as an observing nation, Paraguay is likely to become a member in the near future too. However, it is only Venezuela that plays an important role in the Latin American world.

Andrei Gangan, an analyst with Kalita Finance, compares the circumstances, which led to the birth of the Sucre, with the history of the euro.

“It took Europe 20 years to shape up the euro. A European country must correspond to a number of criteria to be added in the euro zone. The euro became the second most important currency in the world as a result of tough tax and budget policies. All the countries of the monetary union were economically and politically developed countries at the moment when they were added in the euro zone.

“Now look at the members of the Bolivarian Alternative for the Americas. If we disregard the political aspect and analyze their macroeconomic indexes, it will become clear that the introduction of the joint regional currency will not change the state of affairs in those countries. The introduction of a joint currency stipulates tough control, the universal legal base, the joint issuing center and many other issues that cannot be solved within a year or two. Any kind of haste will inevitably result in a failure of any large-scale idea,” the specialist said.

Other specialists say that an opportunity for a number of countries to introduce a joint currency appears only after their economic growth becomes stable. The birth of the euro was pushed several years back due to the economic decline in Europe in the beginning of the 1990s.