Danish Prime Minister Anders Fogh Rasmussen may become NATO’s new Secretary General. He ruined relations with Russia in 2002. Rasmussen is known for his support of all actions and plans of the United States – from the wars in Iraq and Afghanistan to Georgia’s membership in the alliance. 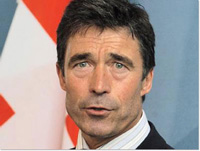 Rasmussen chaired the government of Denmark in November 2001. The USA and NATO launched their operations against Talibs in Afghanistan soon afterwards. Denmark took an active part in the crusade and sent 700 servicemen there.

The previous US administration supported Rasmussen for the post. If Rasmussen chairs NATO, he will do everything not to scrap the operation in Afghanistan. The Obama administration does not mind his candidacy either. Therefore, Washington does not have a reason to replace him with someone else.

France has a different motive to support the candidate from Denmark. France would like to have a bilingual chairman who would be fluent in two official languages of the alliance – English and French. The Danish politician fits right in at this point. In addition, he stands up for the development of cooperation between NATO and the European Union, which matches the views of French President Nicolas Sarkozy. Germany and Italy do not have anything against Rasmussen either.

Turkish Prime Minister Recep Tayyip Erdogan has not forgotten Rasmussen’s actions during the cartoon scandal in 2005-2006, when a set of cartoons published in a Danish newspaper sparked violent protests among Muslims all over the world. The newspaper presented its apologies to the Muslim nations, whereas Rasmussen, as the prime minister, refused to do it. He only said that Denmark’s newspapers had a right to express their opinions.

Erdogan said that he had had several calls from the leaders of Muslim states, who asked him to veto Rasmussen because of the cartoons.

Poland does not want to see Rasmussen as the chairman of NATO either. Poland would like to have its own official as the secretary general of the alliance taking into consideration NATO’s eastward expansion.

Many believe that Rasmussen can be good for Russia too. However, one shall remember the tragedy at the Moscow music theater in October 2002. The Chechen Congress was held in Denmark’s Copenhagen at the moment when Chechen terrorists took hundreds of people hostage. The Danish prime minister did not apologize to Russia. Vladimir Putin canceled his visit to Denmark and did not arrive at the Russia-EU summit afterwards. Neither Putin nor Medvedev have visited Denmark since then.

In 2004, the USA and Denmark signed an agreement, which made the radar station in Greenland a part of the future missile defense system of the USA. Russia set out is concerns about the decision. Rasmussen expressed his opinion about Russia in 2007, when he said that the alliance should take new steps to make Georgia a NATO member.

NATO’s new face will be unveiled at the summit on April 3-4. The new head of the alliance will take office on August 1. Anders Fogh Rasmussen, the anti-Russian and the pro-US politician, is the most likely candidate.