The presidents of Russia and the United States, Dmitry Medvedev and Barack Obama, will have their first meeting one day earlier than was previously scheduled. The historical meeting will take place on April 1 in London, on the threshold of the G20 summit devoted to the struggle against the financial crisis. 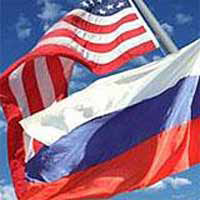 The statement was made by Mr. Medvedev himself, as he was greeting the delegation of the US independent advisory committee for US politics towards Russia. The committee was set up in August 2008 under Bush’s rule to prepare adequate reports to the presidential administration and the congress.

“Unfortunately, our relations have degraded considerably during the recent years. It is very sad for us. I believe that we have all opportunities to start a new page in the US-Russian relations,” Medvedev told the US officials. He continued with saying that a lot of vital international issues depended on the state of the US-Russian relations: the non-proliferation of arms, the struggle against terrorism, the economic development. “The signals that we receive today from the United States, I mean the signals that I receive from President Obama, seem to be quite positive to me,” Medvedev said.

Russia’s Foreign Minister Sergei Lavrov has already had a meeting with his US counterpart, Hillary Clinton. The meeting took place on March 6 in Geneva. Clinton gave Lavrov a present – a box with a red button in it to symbolize a new start in the relations between the two countries. The word ‘Reset’ was written on the button with a Russian translation written in Latin characters – ‘Peregruzka.’ Sergei Lavrov said that the Russian translation of the word ‘reset’ was inaccurate.

"We worked hard to get the right Russian word. Do you think we got it?" Clinton asked Lavrov.

"You got it wrong," Lavrov said. "This says 'peregruzka,' which means overcharged."

The two diplomats laughed and Clinton explained: "We won't let you do that to us, I promise."

The correct translation of the word ‘reset’ would be ‘perezagruzka.’

“Unlike George W. Bush, the incumbent US president Barack Obama wants to develop ties with both Washington’s NATO allies and with such countries as Russia and China. The latest statements from Hillary Clinton and other top officials of the US administration testify to the intention of the White House to develop relations with Moscow. Sergei Lavrov and Hillary Clinton have accomplished a major goal – to prepare the upcoming visit of the US and Russian presidents,” deputy director of the Institute for the USA and Canada of the Russian Academy of Sciences, Viktor Kremenyuk said in an interview with the Vremya Novostei newspaper. “For the time being, there are no reasons to speak about any breakthrough, but Obama is quite capable to reset the ties,” he added.