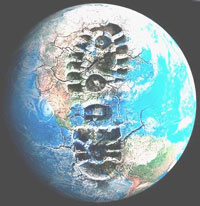 Before we look at the future development we have to remember that there are four factors that power an economy: consumers, investors, government, and a favourable trade balance. Some economies such as China rely on favourable trade balance and Foreign Direct Investment (FDI) for their growth. For example according to the Chinese Ministry of Commerce, from 1990 to 2007, China received $748.4 billion in FDI. At the same time, since its economic liberalization, China has recorded consistent trade surpluses with the world. For example China has registered trade surpluses of $102 billion for 2005, $177.47 billion for 2006, $262.2 billion for 2007, and $295.47 billion for 2008. China currently has accumulated nearly two trillion dollars in foreign exchange reserves.

In contrast to the China, the United States has relied on consumers and the government for its growth. According to Peter G. Gosselin citing Roach of Morgan Stanley Asia, U.S. consumers constitute only about 4.5% of the global population, yet they bought more than $10 trillion worth of goods and services last year. In contrast the Chinese and Indian consumers combined which account for 40% of the global population bought only $3 trillion worth. He goes on to point out that according to government statistics, from 2001 to 2007, U.S. consumer spending shot up from a little over 73% of the economy to nearly 77%.

If we just look at the differences in consumption levels between US and China-India, we’ll see that these countries are not in a position or have the financial resources to pick-up the slack left by the US consumers. Anyway, China’s growth is based on its exports and the FDI and not its consumers. When the international market shrinks, the Chinese will see (as they do now) a sharp drop in their actual growth. If they try hard they may be able to keep their people’s standard of living at its current level (highly unlikely); but they will be unable to increase consumption. Anyway, according to the Bloomberg (19 January 09), the Chinese unemployment rate has jumped to its 30 year high and will most likely increase further.

How about Japan? Japan also started its economic miracle by export-led growth. Japan saved hard, and worked hard to become one of the largest economies in the world. However, the bursting of the housing bubble of 1990-91 started a deflationary period that Japan never really recovered from.

Add to this the recent financial crisis and you’ll see that Japan is once again entering another deflationary period. In deflationary periods, consumers spend less and try to save more. The fear of losing one’s job, the psychology of ever decreasing prices, and general feeling of doom act against free spending by the consumers. One should also understand that Japanese consumers are reluctant to spend like their American counterparts. According to the available figures (2005), the Japanese consumption was only 55% of the GDP. Compare this to the American consumption of 77%. So the Japanese consumers cannot help either.

What about the EU? Euro zone consumers have a slightly better consumption rate than the Japanese. The consumption rate for Euro zone (2005) was 57% of the GDP. In addition the Euro zone is facing severe financial problems with many countries such as Spain, Ireland, Italy and others facing mounting debt and shrinking export market. Consumers already hit by the housing crisis, financial crisis and nowthe imminent unemployment crisis cannot be expected to start spending wildly.

So who is going to take the position left vacant by the US and act as the world’s economic locomotive and pull the world out of the depression? The answer is no-one and everyone. US is clearly not able to do that much. As a matter of fact the US consumers have to get used to lower spending levels for at least a decade, if not for good.

According to Howard Davidowitz, chairman of Davidowitz & Associates, as quoted by Aaron Task in Yahoo Finance, American's standard of living is undergoing a "permanent change" - and not for the better as a result of:

"The average American used to be able to borrow to buy a home, send their kids to a good school [and] buy a car," Davidowitz says. "A lot of that is gone.

To start with the housing market had collapsed completely leaving many banks holding worthless pieces of paper. In addition, these papers were (partly) insured by many insurance and financial institutions that weren’t banks, but because of financial deregulations, had acted as banks. They were also hit by the bad mortgage problems. In short, all the financial institutions, banks, insurance companies and others were suddenly in trouble.

This hit the stock markets, with the shares of these institutions taking a nose dive. These institutions are extremely important for the economy. They provide the logistics for financial transactions. Any problem here affects all parts of the economy. So it was not a surprise to see that all normal financial transactions suddenly came to a halt, hitting other sectors of the economy. Share prices of all the affected sectors began to go down and with it the fortune of the share holders. To see the extent of the damage done one just has to look at how much various stock markets have fallen.

The following stock markets data was published by The Economist (21 Feb. 2009) which shows the extent of the fall since Dec 31st 2007:

For people in general, shares act both as saving and investment. The average person buys share in hope of getting better return than the banks. It is also easy to get in and out of the market. The advancements in information and communication technologies, the costs of buying and selling have fallen steadily in the last decade. So now anyone with a computer can buy and sell shares. This ease of entry enticed an ever increasing number of ordinary people to enter the stock markets.

Now the people have been hit by three disasters. First they lost a lot of money in the housing market. This was both real and illusory. First they were hit with the housing crisis. Many have lost their homes or have seen the value of their homes depreciate heavily. Then they were hit with the collapse of the stock markets. Trillions of Dollars, Yens, Euros and Yuans have been wiped-out in a relatively a short time. Then many have lost their jobs and many are uncertain about the future job security. All these have had a tremendous impact on the consumers, forcing many to heavily reduce their consumption, which in turn have begun to affect businesses which in-turn are shedding workers to compensate for the loss of sales and revenues. This is a classical deflationary circle that feed on itself.

Now we face a classical problem: the increasing budget deficits. Exactly when the economy is contracting and tax receipts are falling, the government expenditure is rising rapidly. In addition, the governments are buying bad debts (US, UK, etc) and trying to spend more on whatever they can in order to arrest the increasing unemployment and stimulate the economy. These large sums have to come from somewhere. They can be borrowed or money can simply be printed. The problem is that some governments are opting for both.

The most important economy is of course the US economy. The US government under Bush spent close to one trillion dollars, and now the Obama administration is promising to spend trillions in the years to come to stimulate the economy. With official US debt now close to 11 trillion dollars and climbing fast, the situation is becoming untenable. According to treasurydirect.gov, last year (2008) US government paid $451 billion dollars interest on its debt. Add to this the Medicare and social security obligations and suddenly things look a lot worse than they appear.

So how can the US continue its deficit spending? By issuing treasury bonds and other security certificates of course. Both public and foreign governments buy these securities which are guaranteed by the US government. According to Reuters (February 18th 2009), foreign central banks alone held $1.76 trillion dollars in US treasuries. According to the same report “The combined holdings of Treasuries and agency securities by foreign central banks at the Fed totalled $2.573 trillion, up $11.223 billion”.

Dr. Abbas Bakhtiar lives in Norway. He is a management consultant and a contributing writer for many online journals. He's a former associate professor of Nordland University, Norway. He can be contacted at: [email protected]