Kosovo independence: Nothing to celebrate at all

Kosovo marks the first anniversary of its independence February 17, although there are no reasons for celebrations. The decision of the West to recognize the separation of the region from Serbia resulted in ethnic cleansings and damaged the reputation of international right norms. It is not ruled out that the Kosovo precedent will become an inspiration for other countries that dream on their freedom too. 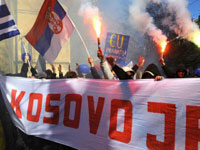 Kosovo independence: Nothing to celebrate at all

Nobel Peace Prize winner Martti Ahtisaari unveiled his Kosovo plan at the end of 2006. The document said that the region would have to be provided with supervised independence. In other words, Serbia would lose control over Kosovo, whereas EU, OSCE and UN officials would supervise the Albanian leaders of the region. Russia and many other countries strongly opposed the plan claiming that it was a gross violation of international laws.

The “elections”, boycotted by the Serbian population, took place in the region in the autumn of 2007. Hashim Thaci, the notorious commander of the so-called Kosovo Liberation Army, became the prime minister. Serbia accuses him of indiscriminate slaughter of many Serbians. The former prosecutor of The Hague Tribunal, Carla del Ponte wrote in her book “The Hunt” that Thaci was involved in the illegal trade of human organs taken from kidnapped Serbs and sold to international traffickers.

According to UN principles, the nations having no federal status have the right for self-determination. “Kosovo Albanians have their national state. It is called Albania,” former prime minister of Serbia Vojislav Kostunica once said.

Scotland in Great Britain, The Basque Country and Catalonia in Spain, the Kurds in Turkey and Quebec in Canada have a lot more rights for their own independence. Thus, the recognition of Kosovo’s independence by many Western countries may result in the global parade of sovereignties.

Kosovo’s annexation to Albania is a moot question, for there is no unity among Kosovo-Albanian politicians at this point. It is worthy of note that they celebrated the region’s independence under Albanian state banners. This may lead to the activation of Albanian separatists in Macedonia, Montenegro and Greece. There were attempts made to create the Greater Albania in 2001, when Macedonian Albanians went on an armed riot. The riot was suppressed only upon the deployment of NATO troops in the region.

The Hungarians have similar problems. Every fourth Hungarian lives in neighboring Slovakia, Romania, Serbia and Ukraine. It just so happens that the principle of the inviolability of European borders was broken on February 17, 2008.

“Almost one-third of UN members have recognized Kosovo’s independence, but many key countries have not. A smaller amount of countries recognized the independence of Abkhazia and South Ossetia, but it does not change the essence of the situation. The Kosovo story says that international institutes do not work anymore. The existence of the international law has been brought into question. There is nothing to celebrate on February 17,” German scientist of politics Alexander Rar told Pravda.ru.