A Russian TV producer said on Thursday he was launching a "There is God" advertising campaign in London to counter atheist posters that were displayed on buses in January. 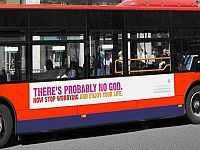 The British Humanist Association (BHA) raised 140,000 pounds ($200,000) to place slogans reading "There's probably no God. Now stop worrying and enjoy your life" on 800 buses. Religious organizations and believers organized protests, but advertising regulators said it was not in conflict with any laws.

Due to efforts undertaken by Russian TV producer, Alexander Korobko, posters reading "There is God. Don't Worry. Enjoy your life!" will appear on London buses in March. Alexander Korobko is the head of the London-based Russian Hour satellite TV channel.

Korobko said his channel signed a contract with CBS Outdoor to put "There is God" posters on 25 London double-deckers from March 9. The posters will have photographs of a Russian monastery on them. "Who said faith in God does not allow us to enjoy life?" Korobko said, describing his poster campaign which has evolved into an alternative campaign.

The Russian-British TV portal was established to help increase mutual understanding between the UK and Russia and to celebrate the Russian-British connection. Interestingly, on its website it says: “There is a theory that King Arthur was a Russian; our Patron Saints are the same - St. George for England and Moscow, and St. Andrew - for Scotland and Russia; one of the greatest Russian poets, Mikhail Lermontov was the descendant of a Scottish family...from Learmonth of Balcomie! And the list goes on; last but not least is our own archaeogenetic discovery about the DNA link between prehistoric Russia and Orkney, documented in our award-winning film - Who am I?"

"Russian Hour" is available, free to view, in millions of broadband homes - in the UK, Russia, Europe and world-wide.

Russian Orthodox Church officials in London and Moscow and had voiced their approval. "We are living in a difficult time, when crisis is being extensively 'promoted'... and people need some life-asserting message," he said, adding the campaign was financed by the channel.