Obama wants too much from Russia

The head of the new US administration is ready to improve relations with Russia and informed his Russian counterpart, Dmitry Medvedev of such an intention. The long-expected meeting of the two new leaders is to take place in the beginning of April. For the time being, it is clear that Obama and Medvedev will discuss the issues of the financial crisis, the missile defense system, the Iranian nuclear program, the recent conflict with Georgia, Ukraine’s NATO membership and many other subjects. Russia has many trump cards to normalize its relations with the United States and defend its views on the above-mentioned subjects. 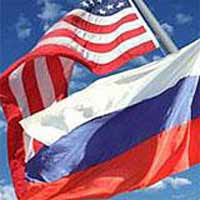 Obama wants too much from Russia

The pause in the top level talks between Washington and Moscow is now over. The two presidents will meet in April of the current year in an attempt to improve the ties that reached the lowest of the low under Bush’s rule.

It is not clear who of the two presidents was the first to make a phone call, although there is every reason to believe that it was Barack Obama. Dmitry Medvedev has nothing against the normalization of bilateral ties.

“We hope that the new administration will exercise more flexibility and will have a better understanding of Moscow’s concerns regarding NATO’s expansion to the east, the takeover of Georgia and Ukraine or the deployment of the US missile shield in Poland and the Czech Republic. Technically we are on two different paths, but our goals coincide from the strategic point of view. When it goes about world events, it turns out that we have a lot in common, that is why we must use this aspect,” Dmitry Peskov, an official spokesman for Medvedev’s administration said.

What do the Americans need?

First of all, they need to curb Iran’s nuclear program. Secondly, they need to prolong several previous agreements, which restrict Russia’s defense power (START-1, the Treaty of Conventional Armed Forces in Europe) and impose new agreements that will disarm Russia even more (START-2). In addition, the USA wants Russia to provide the constant transit of NATO troops to Afghanistan. Finally, they want to use Russia’s influence in Arab states “to normalize the situation in the Middle East.

The list makes it clear that the Americans want too much. One may assume that Russia will support the idea to prolong the START-1 Treaty, but the country is not likely to even think about START-2 or another nuclear disarmament document that will let Washington take advantage of Russia.

It goes without saying that Russia is ready to use its influence in Arab countries not to let a further aggravation of the situation in the region. However, it does not mean that Russia will stop selling its weapons to its Arab customers. Russia will not accept the US ideas as far as Iran is concerned. Washington wants Russia, as a constant UN Security Council member to agree upon the introduction of sanctions against the Islamic Republic in an effort to cease its nuclear program.

Russia will lose billions of dollars of profit in this case. What is worse, many other countries will think of Russia as an unreliable partner. Such a step will obviously undermine Russia’s positions in the Islamic world.

At any rate, one should not overestimate the coming talks with Obama: the new president of the United States is open for compromise.

Even if the USA plays an important role in NATO, it will not be able to grant the membership to Ukraine and Georgia without the participation of European members in the process. As a matter of fact, the only problem, which Obama can solve, is the question of the US missile defense system in Poland and the Czech Republic.