Bolivia Breaks Relations with Israel for the Aggression in Gaza

The Bolivian president, Evo Morales (photo), announced this Wednesday (14th) the breaking off of diplomatic relations with Israel, to reject the indiscriminate aggression of this country against the Palestinian Gaza Strip. According to the representative, a state that defends life cannot accept with silence the genocide being perpetrated by Tel Aviv in the Gaza Strip, where over a thousand people were killed, a great deal of them women, children, and elderly. 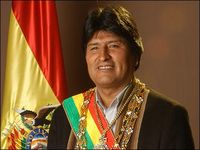 Bolivia Breaks Relations with Israel for the Aggression in Gaza

After consulting experts in the law, additionally, it was decided to petition the International Criminal Court (ICC) to investigate crimes against humanity committed by the entire government of Israel they informed. Morales remembered the postulates of the Roman Statute establishing the ICC instrument, which reflects the will of nations not to leave unpunished such crimes as were committed in the last three weeks against the Palestinian people.

We ask the support of the international community in condemning the massacre of so many human beings, urged the governor of Aymara origin, who noted the right of states to sue in the ICC to investigate the crime of genocide. The leader of the Socialist Movement also asked relevant authorities to withdraw the Nobel Peace Prize given in 1994 to Israeli president, Shimon Peres.

Peres has done nothing to halt the aggression, on the contrary, he defended it and warned the Head of State in the Palace of Government, before some 40 diplomats and part of the national and international press. According to Morales, the attack on Gaza caused a retreat to the time of the crimes of the Second World War.

Sources in the Chancellery of the Executive Branch also explained to Prensa Latina that Israel has an ambassador in Lima, Peru, in addition to a Bolivian consul in this city.