Does the world need an armed to the teeth, and heaven help us all…nuclear armed…racist apartheid state in the Middle East? In September of 2001, Israel was branded a "racist apartheid" state by thousands of non-governmental organizations attending a forum in South Africa that was part of the UN Conference against Racism. Outraged Israelis walked out of the conference saying that the declaration would delegitimize the Israeli state. They were joined by their American benefactors / protectors. 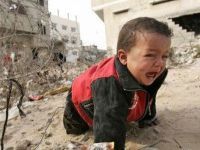 Indeed, the State of Israel has been delegitimized, not by that conference, but by their own sordid, brutal, fascist behavior quite reminiscent of the Nazis during the war. Homes and vineyards are bulldozed to make way for more and more Jewish settlements, as the Palestinian native population continues to disappear from the map. Lebensraum? Israel has been systematically carrying out genocide, indeed a holocaust, against the Palestinian people…very literally. Most recently, Israel used a weapon of mass destruction known as phosphorous bombs which literally set people on fire. This type of murderous behavior has been going on since the establishment of the State of Israel in 1948.

While Israelis bask in swimming pools, less than 15% of the water is allocated to Palestinians, who must ration water for drinking and cooking. Palestinians are made to pass through numerous humiliating checkpoints just to carry on their day-to-day life. In fact, many are prevented from having employment because of this. Additionally, there are “Jews only” roads.

Children are frequently target practice or subjects of intimidation on the part of the Israeli occupation forces. Children are literally starving since Gaza has been blockaded, with food supplies and humanitarian assistance denied them and electricity is cut off. This is all because Israel does not like the democratically elected Hamas government and has done everything to bring down this government by kidnapping and killing many government officials in addition to the illegal blockade.

The total dead thus far in the recent campaign is well above 800, including over 250 children, and many more victims may still be buried in the rubble. The International Federation of Journalists has condemned Israel’s targeting of journalists. In Gaza City, journalists held a sit-in after Israeli forces bombed the Jawhara Media Building killing a journalist, Ala’ Murtaja. Another 22 Palestinians were killed Wednesday morning in bombing and shelling as Israel's “Operation Cast Lead” entered day 11. The dead included four people killed in a children's playground near a mosque in the Sheikh Radwan neighborhood of Gaza city.

Israeli forces shelled a house on the Gaza Strip that they had moved around 110 Palestinians into 24 hours earlier. Around 70 corpses were found there later by a Palestinian paramedic. Does such behavior sound familiar to anyone? As in the wholesale slaughter the SS engaged in? Dr. Mawia Hassanien, head of emergency services at Shifa Hospital says at least 12 emergency workers have been killed and 32 injured. Eleven ambulances have been destroyed. It is an outrage that emergency workers and ambulances are attacked. Then there was the United Nations school where 40 Palestinians seeking shelter were killed. Many children were among the dead in what British leader, Gordon Brown, called the ‘darkest moment yet’ in the Gaza crisis.

THE PEOPLE BEING KILLED ARE CIVILIANS, NOT THE ONES LAUNCHING THE ROCKETS. That is just an excuse, a pretext to cleanse the entire area. The military invasion of the Gaza Strip by Israeli forces bears a direct relation to the control and ownership of strategic offshore gas reserves. This is a war to conquer. The issue of sovereignty over Gaza's gas fields is crucial. From a legal standpoint, the gas reserves belong to Palestine. The election of the Hamas government and the collapse of the Palestinian Authority after Arafat’s death have enabled Israel to establish de facto control over Gaza's offshore gas reserves.

For many decades, the world has been beaten over the head with “guilt trips” about the events of the war as though the horrors of that war happened only to Jews alone. This has made it possible for Israel to get a free pass to behave in the most horrendous, inhuman and savage manner. Israel is still hoping the latest genocidal onslaught would have yet another desensitizing and de-mystifying effect on people’s perceptions and attitudes and that people will continue to either ignore or mindlessly support their behavior.

There are war crimes being committed, and no excuse is going to pass the test of credibility, even though Israel is using the pathetically small response of crudely made Hamas rockets as an excuse for their genocidal campaign. As many have experienced, Israel heavily employs rabid counterattack and name calling (anti-Semite, Nazi, etc.), mendacity, deception and disinformation to conceal its criminality and barbarism. They have seen to it that it is not politically correct to criticize Israel, otherwise one risks life, limb and livelihood.

Visible on western TV screens are Israelis who complain of lack of sleep, fear, paranoia. They have the audacity to complain that they are the victims, but the dead, while always a tragedy and lamentable, are few and far between. You see them playing musical instruments in their shelters, complaining about trivial inconveniences and palpitations, while Palestinian children sit bloodied amid rubble unattended in the middle of countless dead bodies and in many cases the dead bodies are their parents. While their ambulances are targeted. Yet much of the western world sits quietly by. The western corporate media is largely complicit in the tranquility of the silent screams and tears of the women and children of Gaza. Western corporate media has consistently sought to deaden all vestiges of empathy.

How long is the international community going to allow this to continue without barely a response except for scattered individuals around the globe? When will Israel be sanctioned? When will Israel be boycotted? When will their ambassadors and representatives be expelled from civilized countries (Gracias, Hugo Chavez). When will neutral / UN peacekeeping forces be imposed upon Israel? Indeed, when will they be subjected to the infamous empire term…humanitarian bombing?

Thus far, the State of Israel is hearing nothing about stopping their campaign of slaughter. They singularly believe they don’t have to agree to anything and that their American benefactors will clear the way for them forever. The State of Israel must transform itself completely...and start to behave like a responsible member of the international community. After the last world war, there is no place on this planet for such behavior by any nation claiming to be civilized, let alone a “democracy.” You would have thought that Israel and the Israelis would know better.