The Star of David Has Become the Swastika

The Nazi / Zionist bombings against Gaza and the Palestinian people are cold, premeditated murders without the least concern for the pain, suffering or the rights of the people. The Zionists of Palestine feel superior, anointed by God, and they retain control of a good part of the worldwide economy. They subjugate nations and governments and silence people. 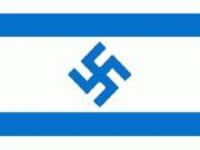 The Star of David Has Become the Swastika

What is happening in Gaza is an exercise in barbarism demonstrating all the practices of the Hitlerites. However, it seems that the lessons of the concentration camps have perfected the brutal character of Zionism. Weapons are used with tungsten and phosphorus that hit a person above the abdomen, giving them no chance of survival.

There are weapons there that are banned by international law. The terrorist organization of the White House used this pretext to invade Iraq. In fact, North American intelligence was ”wrong.” The weapons of mass destruction were not in Baghdad, but in Tel Aviv. And they are used against defenseless men, women and children in the most inhuman and cowardly manner possible, typical of the Nazi / Zionist.

The terrorist government of Israel has refused to negotiate what they want in terms of peace and Hamas and insists, with support from the rotten media, which does not show the images of barbarism, in "justice." The Palestinian party that governs Gaza was elected by direct vote in one of many peace agreements, with U.S. participation, who has never done anything else throughout history where they did not always defend the aggressor Nazi / Zionists. The media will not say that the Zionists are major creditors of their network.

Meanwhile, the corporate media would sell their mothers if necessary to support the power of lying. The end of the year holidays exchanged the horror of the Palestinian holocaust for shoppers in traffic jams. Happy people in long lines of cars, many made by General Motors, asking why is it necessary to watch a burning fire.

There is a simple movie called DOMINIUM whose story goes on in a country governed by a similar Nazi / Zionist entity, in which emotion is considered a disease. Love is a disease. Being jointly liable is a disease. It seems that wherever you look, there is a television program showing the virtues of coldness and the failure to notice. It is a drug that causes people to no longer feel. To feel emotions.

This role is fulfilled by the media today and the Nazi / Zionists know it. They are the big bankers, big business, and they are supported by the money of people who are dominated by tennis brand, sandwiches of this or that network, and probably are already buying in bulk perfume with the smell of hamburgers launched by one of these networks of capitalist terrorism.

In the movie, the factor of control and command of the Nazi / Zionist state is the clergy. They are no different from the Jewish fundamentalist who murdered Prime Minister Rabin for having accepted the peace agreement. The various religions have historically been serving as a pretext for wars and defense of economic interests. Pope Pius XII, more recently, was an ally of Hitler and John Paul II and Benedict XVI are instruments of neo liberal capitalism.

The Zionists themselves claim they have been persecuted throughout the history of humanity and therefore collect interest charges with blood and barbarity. As if they were the only ones who ever suffered.

They murder, rape and torture all in the name of the right to exist, removing (ethnically cleansing) others. They are bloodthirsty simpletons supported by the power of the largest military power of the world, the USA.

The North Americans and British (USA is their European colony) refused to vote on the proposal of the Arab countries for a ceasefire demanding instead that Hamas stop launching homemade rockets on Israel. Self-defense is only for the Zionist owners of the banks and of the great enterprises that finance political campaigns, inclusive of that of Barak Obama.

They call it civilization. They feel and proceed as though they are the "chosen people." There are those who are going to be pocketed in exchange for innocent chocolates in the society that has pictures mounted where the bathrooms have toilet soaps to remove "Palestinian bacteria," "Latin bacteria" and "African bacteria,” etc.

They are just murderers, genociders. They transform humans into inert bodies in New Years’ traffic jams who are horrified about lost puppies on the roads and the despair of the owners. The owner of that foot in the photo above is distant, so it does not matter. Don’t they realize that they act in all the corners of the world and extend their claws and their swastika-shaped Star of David to “cure” the evil inferiors from feeling emotions.

The address in order to have an idea of the extent of the horror of the swastika / Star of David is: