Estonia is launching a new campaign for the assimilation of the Russian-speaking population. The Russians residing in Estonia will be pushed towards changing their Russian surnames to Estonian surnames. The administration of the Baltic nation decided to use such a measure to conceal its absolute inability to struggle against the financial crisis, which had put the three Baltic states on the edge of the economic collapse. 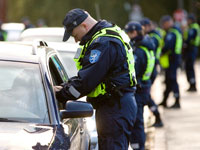 Estonia’s Internal Affairs Ministry intends to amend the Law about Names. In other words, those wishing to become integrated into the Estonian society will be forced to change their names to make them sound like typical Estonian names.

The bill particularly says that a citizen can obtain a new surname under his or her reasonable wish, if a citizen wants to bear an Estonian surname with a view to become integrated into the Estonian society. The amendment has a rather “progressive” objective: to simplify the procedure for the provision of Estonian names. Nothing is said about the fact that people will have to bid farewell to their Russian names for good.

Estonia’s Postimees newspaper wrote that a well-known footballer Konstantin Kolbasenko became Konstantin Nakhk in 2001. “I and my wife discussed the issue, and, since we live in Estonia , we decided that an Estonian surname would fit us better,” the footballer said. Kolbasenko simply took the last name of his Estonian wife.

The effective law contains eight arguments for changing one’s name. One may file a petition for a new surname if the old surname is either complicated or linguistically cacophonous.

It is worthy of note that the current name-changing campaign is not the first one in Estonia. The country already held one during the 1930s, when the nation was living under the rule of dictator Konstantin Pyats. People would renounce their German and take Estonian names instead. However, it did not stop many Estonians from becoming staunch allies of Nazi Germany several years later.

Latvia, Estonia’s neighboring state, began to deliberately distort Russian names and surnames soon after the nation declared independence. They would add ‘–s’ flexions at the end of Russian names. For example, Vladimir Ivanov would be altered to Vladimirs Ivanovs to give the Latvian spirit to the purely Russian name. Those having the sound ‘sh’ in their names would have it replaced with ‘s’ – for example ‘Siskins’ instead of ‘Shishkin.’ The new name - ‘Siskins’ would sound humiliating to its bearer, for the Russian word ‘siski’ translates as ‘boobs,’ whereas ‘shishka’ means a ‘pine cone.’

Nowadays, Estonian officials can change the Russian surname ‘Novikov’ to ‘Noovikoff’, ‘Nikitin’ to ‘Niikitinn’, ‘Kovalenko’ to ‘Kovaalenk’, ‘Petrenko’ to ‘Petereenk’, etc. All this would be presented as a positive situation to exemplify the naturalization of the Russian-speaking population willing to become full-fledged Estonian citizens. Needless to say that no one in the Estonian authorities will wonder whether any Estonian Russians ever wish to change their names like that.

The name-changing campaign and Estonia’s tense relations with Russia aim to distract people’s attention from the severe consequences of the economic crisis. The country nears its economic collapse. Apparently, the Estonian government considered that it would be best to initiate another outburst of Russophobia. Many Estonian guest-workers have been fired from their jobs in Sweden and Finland, and many of them are expected to return to their motherland to exacerbate the social situation further on.