Russian scientist: 'USA is a pyramid that has to collapse'

The US administration refuses to comment on the forecast made by Russian scientist Igor Panarin, who said that the financial crisis may split the United States into six entities. “I am perplexed and therefore I think I will have to decline comment,” White House spokeswoman Dana Perino said. 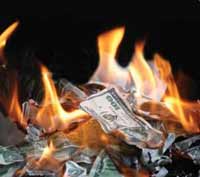 Russian scientist: 'USA is a pyramid that has to collapse'

Several days ago US and other Western mass media discussed the interview of Russian Professor Igor Panarin, who predicted a civil war in the United States by 2009 and said that the war would eventually result in the collapse of the nation.

Igor Panarin, the dean of one of the departments of the Diplomatic Academy of the Russian Foreign Ministry, originally presented his apocalyptic report at an international conference in Australia in 1998. He repeated his forecast on November 24 of the current year to the Izvestia newspaper. His forecasts seemed totally unreal ten years ago, although they obtain a whole new meaning under the condition of the global economic crisis.

“It was clear back then that the financial and economic power is the major destructive power for the USA. The dollar is not secured by anything. The nation’s foreign debt was growing like an avalanche, although it didn’t exist at all in the beginning of the 1980s. The debt exceeded the mark of two trillion dollars in 1998, when I made my report. Now it makes up over 11 million. This is a pyramid that will definitely collapse,” the scientist said.

The scientist believes that it currently goes about the replacement of the regulation system in a global financial scale. America will not be the world regulator anymore. Two countries may take its place: China with its enormous reserves and Russia as a country that could play the role of the regulator on the Eurasian space.

As far as the fate of the USA is concerned, the aggravation of the financial crisis will destabilize the situation on both the employment market and between the states and the federal center. The political structure of the United States will become a lot more vulnerable.

“There is no joint legislation on the territory of the country. The common Highway Code does not exist there either. The framework which holds the USA together is rather fragile. The armed forces in Iraq mainly consist of non-citizens of the USA. They serve there because they promise to grant them US citizenship,” Igor Panarin said.

As a result, the country will split into six parts. “The first part is the US Pacific Coast. Here is an example. The Chinese make about 53 percent of San Francisco’s population. An ethnic Chinese used to be the governor of the State of Washington, whereas its capital, Seattle, is dubbed as the gateway for Chinese emigration to the USA. The Pacific Coast gradually falls under the influence of China. The second part is the south and the Mexicans. The Spanish language is widely spread there, it has almost become a state language of the territory. Texas openly fights for its independence. The Atlantic Coast represents a different ethnos and a different mindset, which may split into two. Central depressive regions make the final group. I have to remind here that five central states of the USA, where Indians live, declared their independence. It was considered a joke, a political show, but it’s a fact. Canada’s influence is strong in the north. We can claim Alaska after all, it was granted on a lease,” the scientist said.