US Defense Secretary Robert Gates said during his speech before the Senate Armed Services Committee that a victory over terrorism in Afghanistan was impossible as long as Taliban and al-Qaida guerrillas were hiding at their bases in Pakistan. 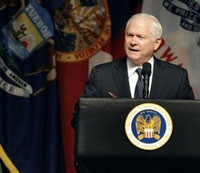 "Until the insurgency is deprived of safe havens, insecurity and violence will persist," Gates said. The official urged the US administration to push the governments of Afghanistan and Pakistan towards cooperation to strengthen the control on the borders of the two states and make them less passable for terrorists. The head of the Pentagon hopes that the relations between Washington and Islamabad in the filed of defense cooperation will improve.

Pakistani President Asif Ali Zardari stated in his recent address to the national parliament that he would not allow a foreign military incursion in the country.

"American troops are coming, without letting us know, without Pakistan's permission, they are violating the United Nations charter," Zardari told NBC news in Islamabad Monday before leaving for New York to attend the U.N. General Assembly and meet President Bush.

The president added that no foreign country would be allowed to violate Pakistan ’s sovereignty under the guise of struggle against terrorism. The president did not name the addressees of those warnings, although it was clear that it was a challenge to Washington .