Venezuelan President Hugo Chavez harshly criticized the US administration again after the unauthorized passing of the USS George Washington along the coast of the Latin American country. Chavez promised to bury the USA in the 21st century. 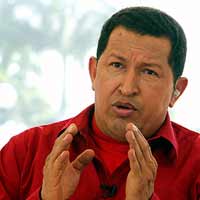 “When Americans appear near our shores with their navy, the George Washington aircraft carrier, one should not forget that it happens at the time when we together with Brazil are creating the Defense Council of South America,” Chavez said in a speech that was broadcast by all TV and radio channels of Venezuela.

“In this century we will bury the old empire of the USA and will live with the American nation like with a brotherly nation, because over 40 million of its citizens live below the poverty line,” the Venezuelan leader said.

Chavez also said that Latin America entered the new era that was marked with the creation of a bloc of leftist forces – Argentina, Bolivia, Cuba, Venezuela, Ecuador, Nicaragua, Chile and Brazil.

“There are two women standing behind us: Cristina Kirchner in Argentina and Michelle Bachelet in Chile. We have in our bloc a worker from Brazil – Lula – and three revolutionaries – Fidel and Raul in Cuba and Daniel Ortega in Nicaragua. There is a soldier from Venezuela there too (Hugo Chavez). Now with the victory of a former bishop at the presidential election in Paraguay, we have a priest in our ranks,” Chavez said.

The rhetoric between Chavez and Bush has been hostile. In response to the Bush administrations anti Chavez rhetoric (he has been called a tyrant, populist dictator and drug trafficker), Chavez once referred to U.S. President George W. Bush as a pendejo (asshole), and refers to him as Mister Danger. In a later speech, he made personal remarks regarding Condoleezza Rice, referring to her as a "complete illiterate" when it comes to comprehending Latin America. On September 20, 2006 Chávez called Bush "the devil".

After Hurricane Katrina battered the United States’ Gulf Coast in late 2005, the Chavez administration was the first foreign government to offer aid to the devastated regions. The Bush administration opted to refuse this aid. Later during the winter of 2005, various officials in the Northeastern United States signed an agreement with Venezuela to provide discounted heating oil to low income families.