Superstar Kevin Garnett will move to Boston after the Celtics and Minnesota Timberwolves officially agreed on a blockbuster trade. 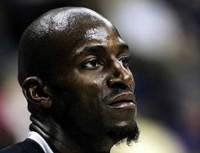 The Celtics have scheduled a news conference for Tuesday 6pm local time to officially announce the deal.

Minnesota will receive Boston's 2009 first-round selection and the first-round pick it traded away to the Celtics in a January 2006 deal.

'This trade is about improving the Minnesota Timberwolves and improving our team for the future,' Timberwolves vice president of basketball operations Kevin McHale said.

'The past few seasons our on-court performance has been disappointing to our fans, myself, Glen Taylor and entire organisation.

'Through this trade, we have obtained very talented young players with a lot of potential, future flexibility with the salary cap and two future first-round NBA draft picks.'

But the trade is centred around Garnett, whose arrival in Boston likely will make the once-proud franchise relevant again.

In the weak Eastern Conference, the Celtics would have a dynamic - albeit ageing - trio of Garnett, forward Paul Pierce and guard Ray Allen, who was acquired in a draft-night trade from Seattle, RTE.ie reports.

The Timberwolves get the Celtics' first-round pick in 2009, unless it is among the top three, and a return of Minnesota's conditional first-round draft pick obtained in January 2006 when they sent Ricky Davis to the Timberwolves for Wally Szczerbiak.

The previous biggest NBA trade for one player came in 1999, when Houston obtained Scottie Pippen from Portland for six players.

"This is a tremendous day,'' said a smiling Pierce, who had been frustrated for years as the sole star on a rebuilding team. "I feel like a rookie again.''

The key to the deal for Minnesota is Jefferson, whom the Celtics were reluctant to part with. He had a breakout season in 2006-07, his third with Boston, when he averaged 16 points and 11 rebounds after struggling with injuries. He joins a youth movement in Minnesota, which drafted forward Corey Brewer from Florida.

"The past few seasons our on-court performance has been disappointing to our fans, myself, (owner) Glen Taylor and the entire organization,'' McHale said. "Through this trade, we have obtained very talented, young players with a lot of potential, future flexibility with the salary cap and two future first-round NBA draft picks.

"Personally, I want to thank Kevin for all of his hard work through the years and what he has meant to the Timberwolves franchise.''

The teams had discussed a trade for the 6-foot-11 Garnett, the NBA's leading rebounder each of the past four seasons, before the June draft. But he preferred other teams than Boston, and the Celtics didn't want to give up Jefferson.

The acquisition of Allen, 32, in a draft-day trade with Seattle to go with Pierce, 29, was a major factor in changing Garnett's mind. It gave Garnett, 31, a better chance at a title after Minnesota missed the last three playoffs in the tough Western Conference.

He also realized that he didn't fit in with Minnesota's strategy of rebuilding with youth and was amazed at all the activity to finalize the trade.

"It's like being in a Lamborghini doing 200 (mph) with your head stuck out the window,'' Garnett said. "It's been like a whirlwind the last 72 hours.''

The Celtics' other starters are second-year point guard Rajon Rondo and center Kendrick Perkins. Only nine players are under contract, although they are expected to sign second-round draft picks Glen Davis, a forward from LSU, and Gabe Pruitt, a guard from Southern California, the AP reports.