Brazilian striker Romario, a former world player of the year, scored what he said was the 1,000th goal of his soccer career today, a tally skeptics including Pele have questioned. 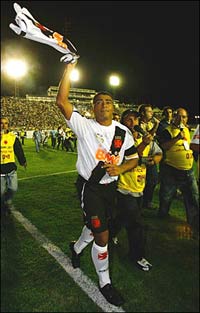 The 41-year-old converted a 48th-minute penalty for Vasco da Gama against Sport Recife, sparking celebrations that held up the Brazilian championship match for 15 minutes. Friends and relatives ran onto the field and Romario completed a lap of honor at Rio de Janeiro's Sao Januario stadium.

“This is an extraordinary moment in my life,” World Cup winner Romario told the crowd in comments posted on Vasco's Web site. “I could even say a few things, but I'll leave it for another time. The supporters have to celebrate with me. ”

Romario recorded his goal tally himself and included junior matches and exhibitions. By his calculations, he is joining fellow Brazilians Artur Friedenreich (1,329 goals from 1909-35) and Pele (1,281 from 1956-77) in reaching the 1,000-goal mark, according to Brazilian media. World governing body FIFA doesn't recognize the mark.

Romario had to deduct some goals from his list after Placar, a Brazilian magazine, found inaccuracies. PSV Eindhoven and Barcelona, two of his former clubs in Europe, refuted that Romario scored all the goals he said, Bloomberg reports.

At the end of the commemoration that lasted about 15 minutes, Romario returned to the field to finish the match.

Andre Dias accounted for Vasco's other two goals in the third and 37th minutes.

In Belo Horizonte, Corinthians overwhelmed Cruzeiro 3-0 with a goal by Everton Santos in the 10th minute and penalties by Marcelo Mattos in the 47th and 67th.

Nautico shocked defending champion Sao Paulo 1-0 in the northeastern city of Recife on a goal by Acosta in the 78th.

In the southern city of Porto Alegre, Carlos Eduardo scored in the 39th minute and Tuta in the 73rd to give Gremio a 2-0 victory over Fluminense 2-0 and its first win of the new season.

Many in soccer consider the achievement dubious, pointing to 71 goals Romario counts that were scored as a teenager and as an amateur, as well as others scored in training games and unofficial matches against small clubs.

In addition, his tally had to be revised several times because he initially counted goals scored in matches that never happened and in games that ended 0-0.

The mark is not recognized by FIFA, which says it only counts goals scored in official competitions.

According to FIFA, Romario still has quite a way to go before reaching 1,000 goals. Not counting the 71 before turning pro, Romario would have 929 career goals.

Others who by some accounts also have scored 1,000 are Brazilian Artur Friedenreich and Austria's Franz Binder.

Friedenreich, according to some historians, scored 1,329 from 1909-1935, principally with CA Paulistano of Sao Paulo. Binder supposedly has 1,005.

Romario stunned everyone by winning the 2005 scoring title in the Brazilian league at the age of 39.

Most of Romario's goals were scored for Vasco, where he began his career at 18 in 1985, the AP reports.