A striptease by 72-year-old actress Sofia Loren could be one of the more outrageous ways that Napoli fans will celebrate if the team are promoted to the Italian top flight this season. 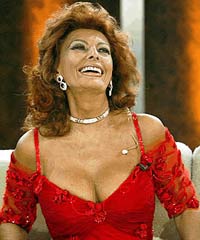 Loren, a movie sex siren from the 1950s and 1960s, is a big fan of the Naples club who have fallen on hard times since winning their first Italian championship 20 years ago.

"I hope that Napoli win these last few games. You watch if we go up I will do a striptease," she told Gazzetta dello Sport in an interview on Tuesday. "The fans have a total passion, the city deserves promotion."

Napoli are third in Serie B, Italy's second division, and have five games left to force their way into the top two or face a promotion playoff, Reuters reports.

There has not been official word from the Naples team as to their support of this suggested incentive from Sophia Loren. There has also not been any word against it either from the team.

There has not been any more word from Sophia Loren as to where she will perform her strip tease if the team wins. While this may be considered against the law in Italy, many laws are allowed to be broken during a soccer match, or in the aftermath.

With the amount of protests that have come from the current Pope and the Vatican about the state of affairs in Italy, it will not be a surprise to many if there is a comment against the suggested strip tease. It will be interesting to see how far the Vatican goes to condemn the possible actions of one of Italy's favorite daughters, associatedcontent.com reports.