Russia crushed Sweden 3-1 in a bronze medal game at the World Hockey Championship in Moscow on Sunday. The host country earlier lost to Finland in the semis. 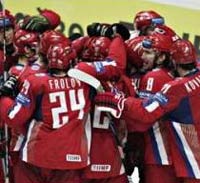 Russia, which has not won gold at world championships since 1993, failed to advance to the final after losing to Finland 2-1 in overtime. Mikko Koivu scored at 5:40 of overtime, sending his team to the gold medal game, after one goal from Jukka Hentunen. Evgeny Malkin was the only Russian to register a goal against Finland in the match, Kommersant reports.

“The win today was very important,” Russia defenceman Sergei Gonchar said. “We were playing in front of our home crowd.

“People were supporting us, cheering for us even after our loss to Finland last night, saying things like ’Good job.’ Before the game we all agreed we can’t lose this last match.”

Emelin gave Russia the lead at 6:18 in the first period with a short-handed rush, firing a backhand past Swedish goalie Johan Backlund.

“The first goal was huge for us,” Russia forward Sergei Brylin said. “Both teams played last night so it wasn’t easy but we jumped ahead.”

Alexander Steen — the only NHL player on Sweden’s roster — scored at 8:08 of the third.

“Unfortunately we made a couple of mistakes in the first period and were two goals down,” Sweden coach Bengt-Ake Gustafsson said. “It was very hard to get things going our way.”
Last year, Sweden won both the Olympic and world titles — the first country to do so, the AP reports.

The Swedes came out a bit flat after surrendering their reign as world champions with a 4-1 defeat by Canada less than 24 hours earlier.

Alexei Emelin and Sergei Zinoviev scored in the first period and Alexander Frolov added a powerplay goal early in the second to put the home team in control.

Toronto Maple Leafs' Alexander Steen, the only NHL player on the Swedish roster, scored midway through the third period to bring his team to life, but the Russians, who beat Sweden 4-2 in the qualifying round, held on for a comfortable win.