Russian WBA ex-champion at heavyweight Nikolai Valuev, who has recently lost his title in the fight with Ruslan Chagaev from Uzbekistan, is going to start training for his next fight under the supervision of another trainer. 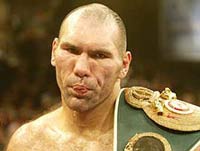 “Manuel Gabrielian will continue to train Valuev, but he will deal only with Valuev’s physical training. The main part of Valuev;s training process will be under control of another famous trainer. He will have to correct Gabrielian’s mistakes. However, the contract hasn’t been signed yet, that’s why the name of the trainer remains a secret now, said Boris Dimitrov, Valuev’s manager.

As Pravda.ru previously reported Valuev will turn 34 this summer, which nowadays, isn't that old. Since he has only had a proper trainer since moving to Germany three years ago, we might expect that he could still conceivably improve his boxing skills, with the heavyweight division wide open and rather weak, there is no reason why Valuev cannot be a factor. Will he regain a title? Probably not but I would not rule it out. What then are the possibilities for the big guy?

Nikolai Valuev says he plans to arrange his next fight this autumn. The fight is supposed to take place in October and the main price is going to be the WBA title.