Klitschko and Maskayev may cancel fight over money issues

No official decision has been made to cancel the fight for the most prestigious title in boxing between Vitali Klitschko and Oleg Maskaev. The fight is on the brink of collapse. 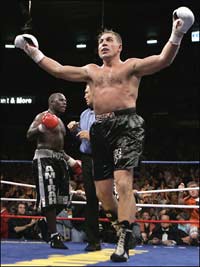 Klitschko and Maskayev may cancel fight over money issues

WBC vice president Edmund Lipinski said that there are great doubts whether the fight takes place. Lipinski also confirmed that there are serious difficulties in the field of the organization and they could become one of the reasons to cancel the fight.

Yuri Fedorov, one of the organizers of the fight, is sure that the fight will take place by all means. He said that the rumours about the cancellation of the fight were nothing more than a joke. However this joke had a very useful effect - it made the participants think in a more reasonable way.

“Maskaev’s promoter was seeking too much money. But now his financial ambitions are lower. The official decision about the signing of the contract is to come out tomorrow. And Samuel Peter will be paid until April 9.

Current titleholder Russian Oleg Maskaev and honorary WBC champion Vitali Klitschko, who has been away from the ring for a year and a half, are set to face off in Moscow in June, but Klitschko told Kommersant yesterday that the unwillingness of Maskaev's and Nigerian boxer Samuel Peter's representatives to reach a compromise is endangering the negotiating process.

Klitschko denied statements made by Peter's manager Ivailo Gotzev that Maskaev would face Peter instead of Klitschko. Peter is the official challenger for the title. Klitschko said that difficulties with both Maskaev and Peter are inhibiting negotiations.