Shark fin dishes to be banned during 2008 Olympics in China

Don't look for shark fin dishes on any official menus at the 2008 Beijing Olympics. 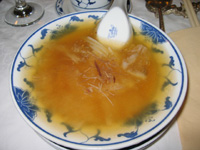 Shark fin dishes to be banned during 2008 Olympics in China

A national legislator said Tuesday that serving rare or exotic dishes give sends out the wrong message about China.

"Serving shark fin to foreign guests during the Olympic Games could greatly hurt China's national image, and officials should start to remove the dish from the dining table right now," Xu Zhihong, a deputy to the National People's Congress, told the state-run Xinhua news agency.

President of Beijing University, Xu also warned restaurants against serving other unusual wildlife dishes such as snakes during the Olympics. He said it could irritate foreign guests and animal rights activists, reports AP.

"It is not only an environmental issue, but one that has a direct bearing on the image of Chinese people."

Officials are using the Olympics as a way to promote China, and change well-entrenched behavior. Campaigns have begun to curb spitting in public places, get hotel clerks and taxi drivers to speak English, and to teach people to line up.