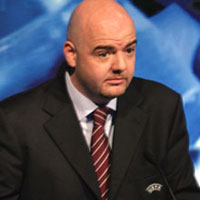 Olsson had been Johansson’s right-hand man - both men are from Sweden - but Johansson lost to Michel Platini in last week’s vote, the AP reports.

UEFA has announced the appointment of Gianni Infantino as UEFA CEO on an interim basis following the resignation of Lars-Christer Olsson.

The 36-year-old Italian has been director of UEFA's Legal Affairs and Club Licensing Division since January 2004 and has been working at UEFA since August 2000 on a range of legal, commercial and professional football matters. He is multilingual, married with three children and a qualified lawyer.

Prior to joining UEFA, Mr Infantino worked as the secretary general of CIES at the University of Neuchatel, and previously as an adviser to a variety of football bodies, including the Italian, Spanish and Swiss Football Leagues. In his position he has been dealing with all legal disputes submitted to UEFA, or in which UEFA is involved, as well as the drawing up of UEFA's policy on legal matters and statutes. He will hold the position until a permanent replacement has been named, UEFA.com says.

Johansson had been head of UEFA since 1990 while Olsson took over the position of CEO in 2004 from the long-serving Gerhard Aigner.

"Over the past three years he (Olsson) has worked hard to continue the dialogue between UEFA and all of European football?s stakeholders and together they have achieved a great deal in a very short period, most notably the continued re-distribution of income from the European Football Championship and the UEFA Champions League, closer links with all our member associations, and the introduction of thousands of mini-pitches across Europe," said Platini in a statement following the announcement.

"I am sure that these initiatives will serve as a solid base for further development and will provide a lasting legacy for the European football family as a whole, DPA reports.

"On behalf of the European football family I therefore take this opportunity to thank Lars-Christer for his dedication and hard work to the game of football, both with the Swedish FA and at UEFA, and to wish him all the very best for the future."