Jelena Jankovic, who might be quicker to laugh than any other player on the Sony Ericsson WTA Tour, was nothing but deadly serious Tuesday in a devastating victory over fourth-seeded Elena Dementieva that sent her, shockingly to many, into the semifinals of the U.S. Open. 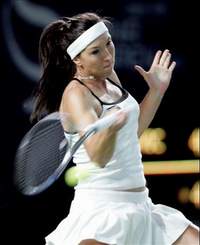 “I cannot believe I won in two sets. What was the score?" she asked, incredulously. "I don't even know the score. Oh, my God, 6-2, 6-1. Don't believe," she said, breaking into her usual off-court fit of giggling.

Jankovic came to New York ranked No. 20 and found an extremely difficult draw that began with No. 39-ranked Gisela Dulko. To reach the semifinals, she has beaten No. 10 Nicole Vaidisova, No. 7 Svetlana Kuznetsova and No. 5 Dementieva in succession.

Dementieva, who has the worst serve of any top-10 player, never held and Jankovic converted 7 of 14 break-point opportunities and won 12 of Dementieva's 14 second-serve points, Mercury News wrote.

Rain washed out the rest of the action at Flushing Meadows, meaning the remaining women's quarter-finals and all the men's fourth-round matches will be played tomorrow.

Two fourth-round matches were halted when the rain arrived.

The 21-year-old Jankovic posted the biggest victory of her career, winning every game when Dementieva served.

Earlier this year, Jankovic wasn't winning anything. She lost in the second round of the Australian Open, then dropped her opening match at the next nine events 10 consecutive defeats in all.