The sniping has started between Italy and France ahead of Wednesday's World Cup final rematch. 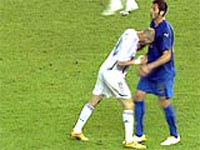 Lilian Thuram insists Les Bleus deserved to win the World Cup, while Gennaro Gattuso says that if there was a championship for sore losers then France would win it easily.

"I know we usually complain after losses, but they do it even more," Gattuso said. "Italy is second to France in that."

A win would put France five points clear of Italy - which drew its opening qualifier 1-1 at home to Lithuania. France won 3-0 at Georgia.

"It's obvious that we will want to win this match even more than in Georgia," Thuram said. "Italy's result is a good thing for the remainder of the competition."

The Azzurri have only one point in Group B. Scotland, Georgia and France lead the standings with three points each.

"It's decisive. There are three points up for grabs and we're coming off a game where an expected three points didn't come," Gattuso said. "We know it's a big game. We're motivated."

Thuram felt Italy was lucky to win the July 9 final.

"We should have won the World Cup," Thuram said. "We were much the better team."

Gattuso, one the fiercest tacklers in the game, says France are just bad losers.

"When we lost the European Championship 10 seconds from the end we didn't create this type of controversy," Gattuso said, referring to Italy's golden-goal loss in the 2000 final.

Italy captured its fourth World Cup title by winning a penalty shootout after a 1-1 draw. But the final will always be remembered for Zinedine Zidane's head-butt on Marco Materazzi's chest in retaliation for the Italy defender's verbal insults.

Neither will play Wednesday - Zidane is retired and Materazzi is suspended.

Donadoni is without nine of his World Cup-winning squad, including Francesco Totti, Luca Toni and Alessandro Del Piero, the AP says.

France coach Raymond Domenech has only Zidane and goalkeeper Fabien Barthez absent from the team which lost to Italy. Gregory Coupet replaces Barthez.