Maskaev to have rest before the possible fight with Klitschko

Newly crowned heavyweight title holder Oleg Maskaev hasn't had much time to rest and relax since winning his belt on a dramatic 12th-round knockout of Hasim Rahman less than two weeks ago. 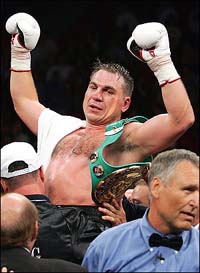 Maskaev to have rest before the possible fight with Klitschko

His postfight celebration was as low-key as his personality: a trip to a Las Vegas hospital to be examined after the grueling fight followed by a quiet gathering with friends and family in the wee hours.

The one perk: He stayed one more day than originally planned in Las Vegas to enjoy his victory. That night, Maskaev, his family and team went out for a lavish dinner.

"That was the extent of our celebration," manager Fred Kesch said.

There is little time to celebrate even now because there is work to be done. Maskaev's victory, which gave fighters born in the former Soviet Union control of the four major heavyweight belts, has put him in position for a unification match with Wladimir Klitschko on Nov. 11 at New York's Madison Square Garden.

The fight is sitting there, and all Maskaev, Kesch and promoter Dennis Rappaport have to do is reach out and grab it. But it's not that simple. Maskaev is still pretty banged up after an extremely physical fight with Rahman, and might not be able to be ready in time to face Klitschko.

From the moment Maskaev won, there have been discussions about a fight with Klitschko, which could earn the Maskaev side more than $5 million, a huge increase over its $1.5 million package for the Rahman bout.

At the postfight news conference, Klitschko adviser Shelly Finkel huddled with Rappaport while Kesch was in an animated conversation with HBO executive Mark Taffet.

"They can have the fight if they want it. We will make the deal," Finkel said. "It's up to them. But we need to move forward very soon. We would like this fight. The Maskaev camp knows that, and they should understand that they are not going to get a better deal anywhere else."

Weeks before Maskaev-Rahman, Finkel came to terms with Shannon Briggs to fight Klitschko on Nov. 11. However, the deal sits unsigned because Klitschko was awaiting the outcome of Maskaev-Rahman. The prospect of Klitschko-Briggs hasn't exactly sent shivers of excitement through the boxing world, and a unification fight would be a huge upgrade.

If Rahman, the favorite, had beaten Maskaev, the unification fight in November would have been unlikely because Rahman promoter Bob Arum was pursuing a Rahman defense against Calvin Brock on Nov. 4.

A Maskaev victory, however, made the unification fight a far more realistic possibility.

Since Maskaev's victory, Rappaport said he and Finkel talk numerous times every day even though Finkel is in the midst of a Mediterranean cruise to celebrate his 30th wedding anniversary with his understanding wife Beth.

Finkel initially offered Rappaport a 50-50 split of the promotion with one exception, that Klitschko keep all of the money generated from his lucrative German television deal. Rappaport said Finkel has since backed off that demand and is willing share the German TV money, making the fight even more enticing.

It's a fight Maskaev wants.

"I would like to have that fight, but it's a matter of time because I need some time to recover," Maskaev said. "That's about it. I have no problem with [the fight]."

However, there are questions about lingering injuries from the fight with Rahman and the quick turnaround that would be necessary. Maskaev also wants to spend time with his wife and four daughters, who just moved from Staten Island, N.Y., to a home Maskaev purchased in Sacramento.

"Klitschko is a very tall, strong guy," Maskaev said. "It's a going to be a totally different preparation for that fight. Listen, we're going sit down and decide. I want to spend some time with my family, but we will sit down and talk with my team. We'll have a plan."

If the Klitschko fight is made, Maskaev probably would head to training camp in a few weeks. That might be too much to ask of Maskaev, who is 37 and went into the Rahman fight with a bad back that is still not 100 percent. Maskaev (33-5, 26 KOs) also has two sore thumbs. His left is banged up and bruised, but should be fine. The right might have a hairline fracture, but he had that problem going into the fight with Rahman.

Maskaev's most serious health issue is a swollen and sore left elbow. He was scheduled to have a CAT scan Wednesday in New York.

"To be frank about the whole situation, the Klitschko fight is certainly the fight we want, but I don't know if we want it on this timetable," Kesch said. "Oleg needs time to recuperate from an extremely hard fight. If the fight was a month or two later, there would be no question. But I don't want himgoing in there less than 100 percent. Is he ready to go back into camp, health-wise and psychologically? We were in a camp for a long time to get ready for Rahman and it paid off. We did eight weeks. You can't expect to anything less than that for a fight the magnitude of a Klitschko fight. We've sat down and talked and Oleg wants to fight Klitschko, but he realizes the limitations of his body."

Said Rappaport: "My feelings are that I think he needs a little more rest, and we are looking at a bunch of options. I want to give HBO and Shelly an answer as soon as possible, but I am inclined to think November would be rushing it. There hasn't been a final decision. Shelly and I have had some very candid conversations. He knows where we are coming from. He knows we would like to make this fight but that we have problems with the timing."

Rappaport said if the fight with Klitschko doesn't come off, there are other fights he can make.

"We have an offer for a December or January fight in Russia," he said. "It's from a group of investors I have done some business with in the past. We could do that fight without U.S. TV, even though we would obviously prefer to have Oleg on U.S. TV."

Maskaev also has a mandatory defense looming against the winner of the Sept. 2 elimination fight between James Toney and Samuel Peter.

Whether Maskaev fights Klitschko next or someone else, he is simply thrilled to have won a heavyweight championship after so many ups and downs in his 13-year pro career.

"It's a big, big pleasure and an honor to have this title because a lot of great heavyweights like Muhammad Ali, [Mike] Tyson, Lennox Lewis and Holyfield, they kept this belt," Maskaev said. "When I came here 11 years ago [from Kazakhstan], I had a dream. My kids have a good education, my wife has a job. Everybody is happy. And finally, I came to this point and I won the WBC belt. Thank God."

Now, if he could just get a little time to enjoy it.