The latest soccer gossip has a white-hot story: Manchester City manager Manuel Pelligrini has his eyes set on Barcelona phenomenon Lionel Messi, 27 years of age, winner of the Best Player of the Year award four times. The move is said to be worth 730 million USD. J. Rodriguez is also referred as a possible reinforcement. 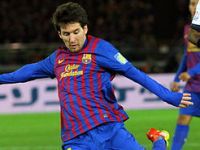 Lionel Messi of Barcelona and Jay Rodriguez of Southampton are both mentioned as possible reinforcements for Pelligrini at City as the January transfer window nears the half-way mark. Pelligrini stated in December that any possible Messi transfer was only rumor, yet before the end of 2014 there was renewed speculation that City was following Messi's situation at Barcelona and was getting ready for a possible bid. City has already signed striker Wilfried Bony (26).

Meanwhile, Carlo Ancelotti at Real Madrid states that it is difficult to imagine a scenario in which Messi would leave Barcelona but if that were to happen then it would be "great" to see Messi and Ronaldo playing together at Real Madrid.

City is also linked to Lyon forward Alexandre Lacazette in a move said to be worth around 38 million USD. Across Manchester, at United, and also involving a move from France, negotiations have started with Paris Saint Germain for the Brazilian defender Marquinhos, 20, in a deal said to be worth 30 million GBP.

And Nemanja Vidic may return to Manchester United cost-free because he is finding it hard to get a place at Inter Milan where Roberto Mancini has placed him on the transfer list. Van Gaal is said to be keen to sign up the defender who is earning 80 thousand Euro per week at Inter for sitting on the bench. Other clubs interested in Vidic are Juventus and Besiktas, however United is said to be in a leading position to re-sign the player.

Arsenal FC is linked to a twin transfer strike at Borussia Dortmund for the pair Ilkay Gundogan (midfield player, 24) and Mats Hummels (central defender, 26) in a deal worth 96 million USD. Lukas Podolski has already been loaned to Inter Milan where he will play under coach Roberto Mancini.

At Chelsea, Andre Schurrle (24) and Mohamed Salah (22), both wingers, could be moving out as Mourinho eyes up Raphael Varane (21) currently playing at Real Madrid. Other players linked to a possible move to Stamford Bridge are Marco Reus or Juan Cuadrado.

From the Premier League to Serie A, Liverpool attacking midfield player Suso has already been confirmed as a reinforcement for AC Milan, while forward Mattia Destro, 23, has also been connected with a possible move to the Milan club from Roma