FC Zenit: Eight out of eight

In Russia, FC Zenit is top with the maximum 24 points from the first eight games of the season, beating Rostov 5-0 away with a hat-trick from Rondón and own goals from Xulu and Dyakov. Two Moscow derbies saw Dinamo and CSKA come out winners. 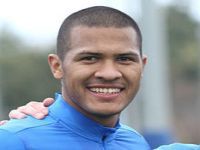 This year I present the European football leagues, the Champions League and Europa League and the UEFA qualifying matches on the same page so that our readers can see what is going on in European soccer at a glance.

FC Zenit 8 games on the trot

In Russia, FC Zenit is top with the maximum 24 points from the first eight games of the season, beating Rostov 5-0 away with a hat-trick from Rondón and own goals from Xulu and Dyakov. Dinamo won 3-1 at Torpedo in Moscow; CSKA beat Lokomotiv 1-0 in the other Moscow derby. Kuban won 2-1 away at Amkar's home ground in Perm while Spartak Moskva was held 1-1 at home in Moscow by Terek Grozny.

Chelsea FC is top with 13 points, dropping two in a 1-1 draw in Manchester City's Etihad Stadium. Schürrle scored for the Londoners, and ex-Chelsea player Lampard scored the equalizer for City five minutes from time. Southampton is second (10), a Wanyama goal getting all three points at Swansea City in Wales. Third is Aston Villa (10) after being beaten 3-0 at home by Arsenal FC, goals from Özil, Welbeck and a Cissokho own goal, bringing Arsenal up to fourth (9). Fifth is Swansea City AFC (9).

FC Barcelona has the maximum 12 points from 4 matches, followed by Sevilla FC (10), Club Atlético de Madrid on 8and Granada CF on 8. Neymar and Messi were on target as Barça won 5-0 in Valencia at Levante; Sevilla beat Córdoba 3-1 away (a brace from Bacca); Atlético was held 2-2 at home by Celta Vigo and Granada won in Bilbao against Athletic, with a goal from Córdoba. Ronaldo got a hat-trick, Bale a brace, Hernandez also two and James Rodriguez in Real Madrid's 8-2 thrashing of Deportivo in Coruña.

Paderborn, Mainz, Hoffenheim and Bayern München are all on 8 points atop the Bundesliga. Paderborn beat Hannover 2-0, the same result obtained by Mainz over Dortmund and Hoffenheim in Stuttgart, while Bayern came away from Hamburg with a goalless draw.

Olympique de Marseille (13) leads after a 3-0 win over Rennes; second is FC Girondins de Bordeaux (13 points), winning 2-1 against Évian; and third is AS Saint-Étienne (13 points), 1-0 winners in Lens.

AS Roma and Juventus have the maximum nine points from the first three games. Hellas Verona FC is third with 7. Roma beat Cagliari 2-0; Juve won 1-0 at AC Milan (Tévez) and Verona won in Torino 1-0.

Sl Benfica is top with 13 points after beating Moreirense 3-1; Vitória (Guimarães) has 11 after a 1-1 home draw against Paços de Ferreira; FC Porto has 11 points after a 0-0 derby draw at Boavista.

In Armenia, after 7 games, the leader is Ulisses FC with 19 points (2-0 winners at Shirak).

The two Russian teams in the UEFA Europa League group phase, namely FK Dinamo Moskva and FK Krasnodar, both had excellent results away in Groups E and H, respectively. Dinamo won against Panathinaikos in Greece by two goals to one, while Krasnodar drew 1-1 in Lille, France.

In Greece, Dinamo had more ball possession (57% against 43%), had two balls on the woodwork, around the same number of strikes but two corners to eight. Kokorin (40) and Ionov (49) put the Muscovites ahead, and Dinas got one back on 63'.

Krasnodar took the game to LOSC Lille in France, having slightly less ball possession (47% to 53%) but managing more strikes on goal, although LOSC had a ball on the woodwork. Laborde scored for the visitors while Kjaer equalized after the break on 63'.

After Zenit's very positive result in Lisbon yesterday against SL Benfica (2-0), CSKA Moskva, Russia's other representative in the Champions League, CSKA, had a disastrous defeat in Italy, losing 5-1 to AS Roma. CSKA scored the goal of honor after 82 minutes (Musa) after Roma entered the break 4-0 up and Ignashevich scored an own goal on 50'.

After Zenit's very positive result in Lisbon yesterday against SL Benfica (2-0), CSKA Moskva, Russia's other representative in the Champions League, CSKA, had a disastrous defeat in Italy, losing 5-1 to AS Roma. CSKA scored the goal of honor after 82 minutes (Musa) after Roma entered the break 4-0 up and Ignashevich scored an own goal on 50'.

FC Zenit (Saint Petersburg) came away from Estádio da Luz (The Stadium of Light) in Lisbon, beating home side SL Benfica by 2-0 with goals from Hulk after five minutes and Witsel on 22'. In the other Group C game, Monaco beat Bayer Leverkusen 1-0. Zenit plays Monaco, Benfica meets Leverkusen in the next round.

Alexis Sánchez puts Arsenal FC through to the group phase of the UEFA Champions League for the seventeenth consecutive season, an amazing feat for manager Arsene Wenger, approaching the totallists Real Madrid, FC Porto and until this season, Manchester United. Steaua Bucureşti went out on penalties and this year misses out on the Champions League.

Zenit passes to the group phase of the Champions League after beating Standard de Liège (Belgium) over two legs, 1-0 away in Belgium and 3-0 at home tonight in Saint Petersburg. The goalscorers for André Villas-Boas' team were Rondón (30') and a brace from Hulk, a penalty on 54' and another on 58'. Zenit, Porto, BATE, Maribor and APOEL pass.

Fabio Capello's Russia began the campaign for the UEFA European Cup Finals in France in 2016 with a 4-0 win over Liechtenstein in Khimki at the Arena Khimki. Two own goals from Martin Buechel on 4' and Franz Burgmeier on 50', a penalty from Dmitry Kombarov on 54' and a strike by Artem Dzyuba on 65' fixed the scoreline in the Group G tie.

Belgium and Israel have not played yet

Serbia has not played yet