And so the first knock-out round ends with Argentina knocking out Switzerland (who nearly equalized in the final minute) and Ottmar Hitzfeld, twice voted best world coach of the year, retires... but after guiding Switzerland to another level. In Salvador de Bahia, Belgium and the USA put on an excellent show, which Belgium won... just. 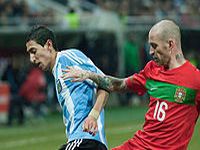 Di Maria is having a good Cup

What a fantastic game of soccer between the USA and Belgium. Let there be no doubt: the USA, as I wrote two weeks ago, is finally a force in world soccer. From a wannabe troupe of thugs eight years ago, the USA transformed itself into a more balanced team in South Africa 2010 and in Brazil, presented itself as a team with the capacity to organize and reorganize, trying different tactical formations, evolving throughout the game, showing some excellent technical touches and playing as equals with national teams which have been part of the scenery in FIFA finals for decades.

The USA is no longer a laughing stock in international soccer and will garner the respect of the very best, I predict, for many years to come. In Brazil, Juergen Klinnsmann took the USA to the last 16. I predict that in 2018 in Russia, he or his successor will reach the semi-finals... unless political events overtake the sports show..

Congratulations to Klinnsmann, Vogts and company, and the US soccer team for some class soccer without the violence which marred its performances of yesteryear.

On another note, let us not underestimate the brilliant Belgium side which won the match with some splendid attacking soccer and a great team effort. Yet another fantastic game of soccer which left the fans sitting on the edge of their seats.

Nigeria fought hard against France but Benzema made the difference and the Eagles go home...together with Algeria which put on an excellent display of football against Germany. A truly amazing game of soccer for 120 minutes, a memorable day in the annals of the World Cup. Algeria, especially, will be remembered as a sensational team in FIFA 2014.

Greece had never reached this stage of a World Cup and deserved to pass through, but it was not to be their day or that of their Portuguese coach, Fernando Santos. Costa Rica faces the Netherlands in the quarter-finals.

The first half belonged to Mexico, and so did the second, until just after the goal, when Robben started spurring the Netherlands forward. Mexico dropped their arms, and allowed themselves to be overtaken in midfield. Despite the excellent intervention by Ochoa, the Netherlands proved too strong at the end of the game. The late rally knocks Mexico out. Netherlands face...

Greece dominated the game, although Costa Rica put up a spirited performance. The goal from Sokratis Papastathopoulos right at the end of normal time was just desserts for a well-organised Greece, very well managed by the Portuguese coach Fernando Santos. Penalties... Costa Rica passes through to face the Netherlands.

Luiz Felipe Scolari is one of the rarest soccer coaches on the planet: he dresses in sportswear instead of stupid suits and ties which have as much to do with soccer coaches as... never mind. Colombia also passes through, to face...Brazil.

Hulk had a perfectly valid goal considered invalid by the English referee Howard Webb, who confused his arm with his chest, with which Hulk had controlled the ball, and the  referee disallowed the ensuing goal.