Full time 0-0. Extra time 0-0. Penalties Sevilla 4 Benfica 2. Sevilla wins the third European title. Ball possession was evenly divided but Benfica had more shots (20 to 11), 6 on target against 4 for Sevilla and seven corners against 4. In the end it came down to penalties and at this level, those who cannot put them away are punished. 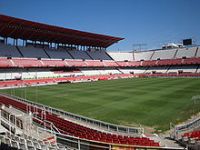 In the semi-finals Benfica overcame Juventus over two legs and returned to Turin to play Sevilla. By the wayside in Benfica's path are Tottenham Hotspur FC (England) and AZ Alkmaar (Netherlands). Sevilla, which after eliminating Betis and FC Porto, beat Valencia.

Final on May 24 in Lisbon between Atlético Madrid and Real Madrid.

How they got there:

If one can sum up the expectations of Lisbon: how disappointing. The Lisbonians would have loved to support Chelsea FC (Mourinho) against Real Madrid (Cristiano Ronaldo) but it is not to be. Madrid is coming to Lisbon on May 24. Real thrashed Bayern in Germany, Atlético thrashed Chelsea in London. La Liga rules.

José Mourinho must be asking what he has to do to win the Champions League with Chelsea FC. Tonight's match was a nightmare, losing 1-3 at home to Atlético Madrid, firing 10 shots at goal on target (the same as Atlético), the fruit of a ball possession of 52% (against 48%) and 17 shots against 14. Chelsea had 5 shots blocked, against 3 but one against the woodwork, against 2 and 4 corners against 9.

At the end of the day, the Spanish La Liga has produced the best football this season, the Premiership second best, and so, two Spanish teams are in the final of the Champions League in Lisbon on May 24.
Mourinho has once again proven his worth, reaching yet another semi-final, his eighth.

Petr Cech will be out of action until the end of the season due to a shoulder injury he sustained this evening in Madrid after 17 minutes. John Terry will also be out, because of a foot injury which saw him limp off the field tonight after 73' but he might be back to captain Chelsea in a Champions League final, Mourinho's third with three teams after FC Porto and Inter Milan. It is also Mourinho's eighth Champions League semi-final.
For the first time in eleven games, Atlético did not hit the net, the fruit of Chelsea's containment game, coming to Madrid determined to get a point. And they got it. Atlético had 69% of ball possession, against Chelsea's 31%, had 25 shots (4 on) against 5 (2) and 6 corners to 4.

Real Madrid will play against rivals Atlético Madrid or Chelsea FC in Lisbon in the Champions League final on May 24, after thrashing Bayern Munich in Germany 4-0, making it a total of 5ive goals without reply over two legs. What has Guardiola done to his team which has gone way off the boil since winning the Bundesliga?
Bayern Munich 0 Real Madrid 4

Isco was the man of the match, in which Real Madrid started off in the best manner with a goal from Gareth Bale after just three minutes. Isco scored the second on 27 and Real went into the bootroom 2-0 up. In the second half, Cristiano Ronaldo was on target to score the 3-0, so Dortmund need to score 4 goals without reply in Germany to pass.Real had 58% of ball possession against the visitors' 42%, 20 shots  with 16 on target, against 14 (9), while Dortmund had seven corners against Real's 6.

Chelsea win the tie on away goals with the aggregate at 3-3, after André Schürrle put the first goal away after 32', and two more balls hit the posts, then Demba Ba struck three minutes from time. Chelsea goes into the semi-final.José Mourinho's side had more possession, 54% against 46% and had 16 shots (10 on) against 13 (6 on target).