Real Madrid will play against rivals Atlético Madrid or Chelsea FC in Lisbon in the Champions League final on May 24, after thrashing Bayern Munich in Germany 4-0, making it a total of 5ive goals without reply over two legs. What has Guardiola done to his team which has gone way off the boil since winning the Bundesliga? 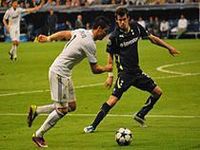 Europa League: Benfica and Sevilla ahead

Benfica beat Juventus 2-1 in Lisbon and now has to travel to Turin to defend the result and stop Juve playing at home in the Europa League final which will be against Sevilla or Valencia. The all-Spanish game ended in a 2-0 victory for Sevilla.

Juventus showed some flashes of what Benfica might have to expect in Turin: in their ball possession of 58% against Benfica's 42%, Juve had 10 shots, 5 on target, against Benfica's 8 (2 on) and 6 corners against the home team's three. Nevertheless, the onus is on Juve to score at least one goal, otherwise, with a clean sheet, Benfica plays in the final.

Sevilla gave possession to Valencia (41% against 59%), had 13 shots ahgainst Valencia's 12, five on target against 3, two goals. Valencia had five corners to Sevilla's 4.