Formula One racing driver Michael Schumacher is back in the news - there are signs that he is waking up out of his induced coma after a skiing accident on December 29 in the French resort of Meribel. Rumours that he may live in a vegetative state have been denounced as untrue by the medical team looking after him. 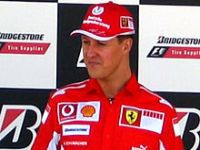 The latest news about Michael Schumacher is positive: he is showing signs of consciousness after lying in a medically-induced come for three months after a skiing accident in late January, when he was skiing off-piste to help someone who had fallen, and hit his head on a rock.

Sabine Kehm, Michael Schumacher's manager, stated today to the media: "Michael is making progress on his way. He shows moments of consciousness and awakening. We are on his side during his long and difficult fight, together with the team of the hospital in Grenoble, and we keep remaining confident.

"We would like to thank you all for the continuous sympathies. At the same time we again ask for understanding that we do not intend to disclose details. This is necessary to protect the privacy of Michael and his family, and to enable the medical team to work in full calmness."

For the time being, Michael Schumacher should remain at the CHU Grenoble, however, the signs are described as "encouraging" by his team.

The accident took place on the slopes of the Méribel resort in the French Alps on December 29, when Michael Schumacher was skiing off the pistes with his son and fell, hitting his head of a rock, sustaining brain traumatism. He was rushed to a specialized unit in brain and spinal injuries in Grenoble, where he has since lain in an induced coma, and has undergone two operations to remove blood clots from his brain.

Off track, Schumacher has been an ambassador for UNESCO, has been closely involved with numerous humanitarian projects and donated tens of million dollars in funds to several causes, apart from being a spokesperson for driver safety. He funded the construction of a school in Dakar, Senegal, for poor children, he supported a hospital for war victims in Sarajevo, he financed the Palace of the Poor in Lima, Peru, which accommodated street children, these just a few of the tremendous number of humanitarian projects he aided or funded.

His life is studded with anecdotes on and off the track, the most hilarious being in Coburg, where Schumacher took over a taxi after collecting his dog, fast-driving it to the airport so as not to miss his airplane, a feat which earned both him and the taxi-driver a warning from the police.

Apart from being an excellent racing driver, Michael Schumacher has also showed considerable skills on the soccer field in football charity matches in which he has participated or which he has organized.

I am sure that I echo the thoughts in the hearts and minds of everyone who has known Michael Schumacher either personally or else as a public figure, in wishing him a full and speedy recovery. Michael Schumacher is one of those people the world cannot afford to lose, at least not yet.