As the European Soccer Leagues draw into their final phase, with many championships already sewn up, now only looking for record-breaking title runs, let us take a look at the signs of interest expressed by clubs, giving an insight into the possible activity in the 12-week summer transfer window from August to September. 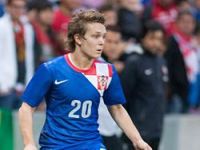 Chelsea, predictably, is in focus for the summer transfer gossip, due to the fact that its manager is José Mourinho and that the London club is once again in pole position at the top of the premier League and on course in the Champions League. Two attacking midfield players have attracted the attention of Paris Saint-Germain, namely Oscar (22) and Hazard (23). At the other end of the age scale, at 33, but also attracting offers at Chelsea, is Ashley Cole, who appears to be a favourite for Liverpool FC and also from the United States of America, where MLS team New York Red Bulls has allegedly expressed interest in the England international defender.

Coming back to the Blues may be the midfield player Josh McEachran, 21, who is currently loaned to Wigan Athletic, and who claims he has the talent to play first-team soccer at Stamford Bridge next season. Coming in to the Blues may be also the Spanish international striker from Atlético Madrid, Diego Costa, 25.

Arguably one of the top two leagues in Europe, alongside Spain's La Liga, the English Premiership is, not surprisingly, attracting the attention of clubs across Europe, one of which is Italy's Inter Milan, a city which this year entered a deep footballing depression. President Erick Thohir has referred to Chelsea's Fernando Torres, Manchester City's Edin Dzeko and Arsenal's Bacary Sagna. Inter is also after Barcelona midfielder Alex Song, 26 years old.

Across Manchester, United, after a dreadfully disappointing season, are looking at the Borussia Dortmund midfield player Ilkay Gundogan, 23.

Meanwhile in Spain, Barcelona is buoyed by the certain signing of the understudy to Messi, the Croatian Alen Halilovic, for next season, on a five-year contract. The seventeen-year-old midfield player has been called the New Messi. The 1m.70 midfield wonder has already played three games at senior level for Croatia, after representing his country in all the junior age brackets. He will swap Dinamo Zagreb for Barcelona next season, for 2.2 million Euros, a bargain if he lives up to his label as the most promising starlet of European soccer at the moment.

Barça fans will be waiting with baited breath...