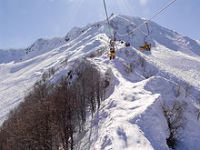 An Olympic record also fell, to the Republic of Korea's Sang Hwa Lee in the Women's 500 metres Race 2x2, which she completed in 74.70.

The Games themselves have set an Olympic Record with the addition of over ten new modalities of sport, comprising twelve events. This means that in total there are now 98 events and sets of medals. Nine of these 12 events are in skiing, 4 each in the Freestyle and Snowboarding and team events have been added in Figure Skating, Luge Relay and the Biathlon Combined Relay.

Another record is to be set in the number of women participants, 1,200, which is 45% of all athletes. There are 5 events in which men and women compete together.

Russia has won seven medals - 1 Gold, 3 Silvers and 3 Bronze. The Gold came in the Team Figure Skating, the Silvers in the Luge, the Biathlon and Speed Skating and the Bronzes in the Speed Skating and Freestyle Skiing. Veteran Evgeny Plyushchenko, 31 and Julia Lipnitskaya, 15, powered Russia to the Gold in the free skating with near perfect performances in their free program events. Albert Demchenko won the Silver in the Luge, Olga Vilukhina winning another in the Women's Biathlon and the third Silver came from Olga Fatkulina in the Ladies' Speed Skating 500 metres 2x2. The Bronze medals came from the Ladies 3,000 metre Speed Skating, won by Olga Graf, Victor An in the Men's 1,500 metres Short Track and in the Freestyle Skiing, Aleksandr Smyshlyaev.

Russia warns UK of consequences should London supply fighter jets to Ukraine
Putin was right about one thing, former British colonel says
Ukraine building up forces to retake lost territories
Ukraine-NATO vs. Russia: The end of a cold war and the beginning of a hot one John V. What's with Americans and Balloons? Guy Somerset German tanks with crosses on them disturb Russian genetic memory like nothing else on earth Lyuba Lulko
'We are ready': Novaya Zemlya range ground ready to resume nuclear tests
Workshops used to upgrade UAVs destroyed in Kharkiv