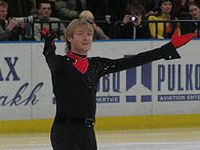 Sven Kramer (Netherlands) won the men's 5,000 metre title in 6 min. 10.76 sec., a new Olympic record, beating his compatriot Jan Blokhuijsen by almost five seconds. Another first of the weekend was in the women's ice hockey match between the USA and Finland, after the introduction of the modality to women, the first goal being scored by the USA's Hilary Knight, a game which the USA won by 3-1.

Ole Einar Bjoerndalen, 40, of Norway equaled the record for the number of medals at Winter Olympics events, winning the sprint event. This brings his tally to 12, the same as his compatriot Bjorn Daehlie. Bjoerndalen has 7 golds, 4 silvers and 1 bronze.

Russia has won the first medals - one gold, 2 silvers and one bronze. The gold came in the team figure skating, the silvers in the Luge and the Biathlon and the bronze in the speed skating. Veteran Evgeny Plyushchenko, 31 and Julia Lipnitskaya, 15, powered Russia to the Gold in the free skating with near perfect performances in their free program events. Albert Demchenko won the Silver in the Luge, Olga Vilukhina winning the other Silver in the Women's Biathlon. The Bronze came from the Ladies 3,000 metre Speed Skating, won by Olga Graf.