Legendary U.S. basketball player, Dennis Rodman, has embarrassed U.S diplomacy as the only American to have hugged, laughed with and drunk with the leader of the Democratic Peoples' Republic of Korea (DPRK), Kim  Jong Un. 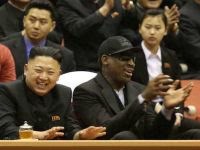 The U.S. State Department said it had no plans to debrief Rodman for any information on the leader who has defied the west, continuing to build and test its nuclear arsenal.

Rodman stunned the diplomatic world with his basketball diplomacy. After watching an exhibition game with a laughing Kim, he dined and drank with him, and was also photographed hugging him.  Rodman had lavish praise for Kim and his father and grandfather.

No other American as far as anyone knows has met with Kim since he assumed command of the DPRK following his father's death in 2011. Since then, Kim has defied the world by pressing ahead with a nuclear arms and missile program which Kim says is designed to counter U.S. aggressive behavior.

The odd part about the big fuss is that it should be the U.S. President, Barack Obama, or the U.S. Secretary of State now Kerry and formerly Hillary Clinton, who should be there meeting and interacting with the leader of the Democratic People's Republic of Korea.  Now they can only hang their heads in shame that they are caught too haughty and arrogant, bellicose and belligerent to make the effort themselves.

How different would relations be if they would climb down from their high horses and do what Rodman has done?  They might come away with a more realistic view and change their perspective.

Diplomacy is not carried out by intrigue, threats, bullying and sending naval vessels to assuage one's paranoia.  The U.S. conducts a foreign policy of cowardice and hiding.  It's easier to be threatening and offensive if you stay clear of personal face-to face interaction.

Personal contact...that human touch is the only thing that can build trust and understanding.  So why don't the cowardly leaders of U.S. diplomacy meet with people like Ahmadinejad, Raul Castro and Kim Jong Un?  Do they bite?  Do they growl?  Do they scratch?

Rodman's visit also put Coca-Cola on display, an indication that some U.S. trade sanctions can be evaded.  The DPRK is one of two countries in the world where Coca-Cola cannot do business because of U.S. sanctions.  Tourists and a U.S. news crew who recently visited a pizzeria in Pyongyang noticed Coke was being served there.

Kim not only attended and watched the game with Rodman, but he also invited Rodman, three Harlem Globetrotters and the crew filming the trip for a documentary to his home for a party.

The group landed in Pyongyang on Tuesday with approval from authorities to conduct exhibitions and film a documentary, but they were not promised that Kim would meet with the group.

Basketball, however, proved to be a common ground as Kim, like his father, Kim Jong-il, is said to be a devoted fan. Rodman and Kim Jong-un talked without translator assistance courtside. The two spoke in English even though Kim only speaks limited English.

The exhibition game featured 12 DPRK players on mixed teams with the American contingent, led by the three Globetrotters: Anthony Blakes, Alex Weekes and Will Bullard.

Rodman spent the game watching from a courtside table with Kim. Rodman also gave a speech to the crowd, in which he told Kim, "You have a friend for life."

"We just couldn't have asked for anything more," a member of the group said. "It was a long shot, no pun intended. We knew he loves the Chicago Bulls and he was a huge basketball fan, and we hoped he would want to meet a five-time N.B.A. champion" and a Chicago Bull.

Dennis Rodman says Obama and Kim share a love of basketball, so "let's start there."