Lionel Messi was Barça's hero, firing two goals to turn the result around at Osasuna in Pamplona, giving Barcelona six points from two games, already five ahead of arch rivals Real Madrid. England and Manchester United star Wayne Rooney is set for a two-month stoppage through injury after tearing his leg in United's 3-2 defeat of Fulham at Old Trafford. 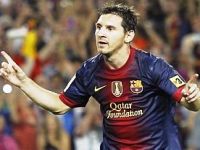 In the Premiership, Chelsea is the early leader ahead of the UEFA Super Cup against Atlético Madrid. Three games, nine points, after a 2-0 demolition of Newcastle United at Stamford Bridge. Swansea and Everton are on seven points, having, respectively, beaten West Ham (3-0 in Wales) and Aston Villa 3-1 at Villa Park. Liverpool and Manchester City drew 2-2.

Zenit and Terek Grozny have 13 points from 6 games in the Russian Premier League. Zenit lost at home to third-placed Rubin Kazan (12 points) by 1-2; fourth placed CASK Moskva beat Krylya Sovetov 3-0 in Moscow and Spartak Moskva (fifth) was beaten 2-1 by Terek in Grozny.

CS Pandurii Târgu leads the Romanian Premier with 16 points from 6 games; in the Netherlands, Twente has maximum points from 3 games and in Ukraine, Shakhtar Donetsk has the best register in Europe, 7 games, 21 points.