Sports chatter around the net has focused on 24-year-old Shakhtar Donetsk Brazilian striker Willian joining his fellow countryman Leandro Damião (23) and Emmanuel Adebayor (28) in the Spurs attack. If the deal goes through, Spurs will have found the replacement for Luka Modric. 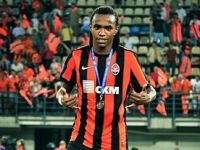 The move is more than chatter and British daily newspaper The Daily Mail claims the transfer news in an exclusive story, stating that André Villas Boas' Tottenham Hotspur is "close to signing" Willian from Ukrainian Premier side Shakhtar Donetsk. They even name a figure - 20 million GBP (25.3 million EURO). After a clear-out, Spurs started the season lacking firepower, playing only one established striker - England international Jermain Defoe, in the opening game at Newcastle United, which Spurs lost 2-1.

Emmanuel Adebayor has already been signed by Spurs from Manchester City and the next target after Willian could be Leandro Damião.

Internacional striker Leandro Damião played for Brazil in the London Olympic Games and was the top scorer of the soccer tournament, scoring six goals. Since he joined Internacional's first team in 2010, he has made 118 appearances and scored 72 goals. Willian (da Silva) has played for Brazil twice. At Corinthians he scored twice in 37 appearances in the 2006-2007 season and at Shakhtar Donetsk, he has scored 19 goals in 129 appearances (since joining in 2007).