Soccer season one step away

As the soccer season in Europe gets ready to roll this weekend in many countries, here is the latest chatter on potential signings for the contenders of the main trophies on the national and international stage. In Portugal, FC Porto already won the Super Cup against Académica; in England, Chelsea lost the Charity Shield to Manchester City FC. 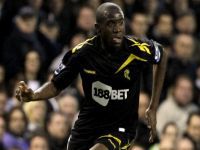 Manchester United have added Robin van Persie to their forward line-up; Real Madrid look set to land Luka Modric from Tottenham Hotspur. Another Spurs player who could be next on the transfer list is striker Jermain Defoe, chased by Queen's Park Rangers, Aston Villa and Sunderland, which is in negotiations with Louis Saha (34) and striker Steven Fletcher, from Wolverhampton Wanderers.

FC Porto have added Colombian forward Jackson Martínez to their line-up and are keen to secure a third consecutive Portuguese title. He scored the goal on 90' for FC Porto against Académica de Coimbra in Saturday's Portuguese Super Cup.

Bolton Wanderers have made an offer to former midfield player Fabrice Muamba, who had to retire from professional football because of a cardiac problem (he collapsed on the field last season in the middle of a game after his heart stopped beating): if he wants to take up coaching, they can help him make his first steps in this career.