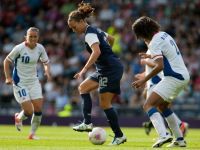 Natalya Antyukh won Gold in the Women's 400 metres Hurdles; in the Long Jump, Elena Sokolova took Silver. Aleksei Denisenko got a Bronze in the Men's -58 kg. Tae Kwon-do and in Women's Wrestling, 63 Kg. Freestyle, Lubov Volosova got the Bronze.