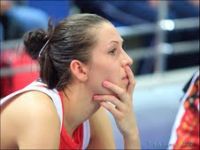 Russian National Team Guard, Eugenya Belyakova is commemorating 26 years old today, on Wednesday, 27 June 2012. In fact, that is our present for her in such an important day trying to increase her great fame in a virgin market, the Portuguese one. She was born in San Petersburg, now is playing by Spartak Vidnoje team and became champion at last European Pre-Olympic tournament in Poland on 3rd. July, 2011. Moreover, her height is 1,84 meters, her weight 72 k and if everything is all right she will be using number five in Olympic Games London 2012 at Boris Sokolovsky final roster.

PRAVDA (EN): Is Dynamo Moscow the only team you play for? If so, why? Do you live close by the training facilities? Tell us how it all began and describe a little bit about the whole journey that you had to go through.

BELYAKOVA: Well, I´ll try to answer all the questions but step by step. At the beginning of my career I was playing in Baltic Star that it was the club which was based in St. Petersburg so I played for them 2 years. We were at last places during that time, then I came to Vologda-Chevakata, another Russian club and at second game fot them I tored my right Achille after 7 month recovered I was still in Vologda we didn´t win FIBA CP and took only 7th place in Russian League by that time a new club named Spartak was born in St. Petersburg and of course I signed the contract of this team and the end of first season and was being there till my contract was finished during the last season in St. Pete I got offer from Sparta and of course I made it work so now I ´m here.

PRAVDA (EN): There were two russian female basketball teams at last Final Eight European League? Is Russian Female Basketball League the best League in Europe? What about WNBA (Women National Basketball Association)? Is there other European leagues which might be attractive for you? Perhaps Spanish or Turkish?

BELYAKOVA:  Next one-well I think WNBA League is much stronger tthan Russian cause they have a lot of teams and the best players are separated in each one so it doesn´t matter how rich is the club they can have only 2-3 superstars so that is why it is very interesting to watch the games and follow the action in tournament in Russia we have 2 really good teams which can afford superstars in every position and the rest of the teams built their success on Americans players and you know there is a rule ABT only 2 Americansa being at the team so Russian players have to play but I think we don´t have enough strong players who can play the rest 8 teams and make rally great competition ! And I think the same situation in Turkey and in Spain but if I have to move somewhere from Russia I would like go to Turkey.

PRAVDA (EN): Your height is 1,84 meters tall. What is your position inside the field? Are you a guard only or can you help your team as playmaker? Do you like painting area to play? How do you manage with players that are taller than you?

BELYAKOVA:  Third one. Well I´m a guard. I like to play as a shooter-guard. I´d played as a point-guard when the teams extremely needed somebody dribbled the ball, but it isn´t my strong side ! I like to run ! I like shoot the basket like go inside and pass the ball Basketball is team game so I like to play with the team and when the players are smart talented I´m so exciting to play with them. I doesn´t matter how tall you are, you have to think on the court and trust your teammates. 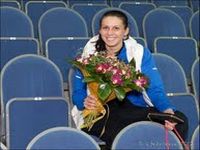 PRAVDA (EN): Did you choose number "07" for the SPARTAK VIDNOJE team?  If so, why did you choose this particular number?  Did you use any other number in the past? Same question concerning with Russian Female National Team? Why do you use number 05?

BELYAKOVA: No, I didn´t choose number 7 in Spartak. The director of the team called me and asked me if I want number 7 and I said yes ! In general I don´t care about numbers it is just numbers but if I have choice I would like to play with the short numbers from 4 to 10. So that´s why in national team I got 5.

PRAVDA (EN): Svetlana Abrosimova (31 years old),that don´t take part of London 2012 team winning Poland Pré-Olímpic Tournament in Poland, Irina Osipova (31) and Liona Korstin (32) are three of the more experienced players playing at Russian National Team. How much influence do they give on the performance of the younger players? Most experienced player is centre Maria Stepanova (2,02 m) that was seriously injured at European Final Eight in Turkey and out of Olympic Games London 2012. Has she a natural substitute in her position? Is that risky for Russian Olympic Team in order to catch your aim?

BELYAKOVA:  Our most experienced players have great personality! They try to help with everything they say how they used to do the stuff out of basketball and on the court too try to safe most important tradicional stuff and ect! You know we have great women´s basketball history so we have to keep all these!!

PRAVDA (EN): Why do you play basketball? Any relative played basketball or was involved with basketball in the past? Perhaps a friend?

BELYAKOVA:  Mmm...well I still have no idea why I´m playing basketball. Cause no one from my relatives was closed to sport and even friends! Well I was 8 years old when my first coach  came to my pre-school and looked at me. I was the most tall girl in my class and my coach said to me to come play some sport with the girls! So my parents just let me go over there and this how it was started! 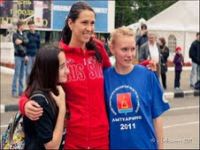 PRAVDA (EN): You were born in San Petersburg 26 years ago but tell me more about your town? Describe it plenty of details? Why visitors love it in such a way? Do you visit it frequently? How much distance is between San Petersburg and Moscow? Do you adapted to Vidnoje region in Moscow?

BELYAKOVA: St. Petersburg is a wonderful place! Of course to me it is the most beautiful city in the world! It is really very nice. Well our city is on the islands and it was capital of Russia in most rich part of Russian history! So that we have a lot of beautiful buildings palaces, nice ambankments! In summer time we have white nights and because of ship all night the bridges between islands are open! So millions of tourists come to call that" Really I don´t know nobody who dislikes St. Pete or stay cold with it. Everybody falls in love with it" And St. Pete is 800 km from Moscow, like one hour flight! I like Moscow too! Really special city))

Check some interesting websites concerning with the article above.