The Games, not the Gaffes

Olympic Games London 2012: Let the world come together in a festival of sport, the members of the international community of nations represented by their young women and men doing their best in a spirit of friendship, mutual respect and cooperation. Sport is about competing, as equals. Let's concentrate on the Games, not the gaffes. 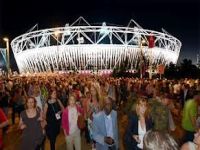 Finally it seems that the British people, and mass media, are getting behind the games, after months of carping and sniping at them and complaining about everything from the tickets to the transportation to the venues to the security to the mascots and logo, which is apparently so virulently hated in the UK that it is sending people into epileptic fits when they set eyes upon it.

It comes as no surprise therefore that some poor fool got the flag wrong at the Women's Soccer game between Columbia and the Democratic People's Republic of Korea (North) placing instead that of the Republic of Korea (South) beside the team at the start of the game. With that much pressure and ridicule being heaped upon the Games, no doubt those involved are hyper-nervous.

Nevertheless, these things are well planned way in advance, with the Olympic officials being regular visitors and residents in London in the years leading up to the event, making sure everything is running smoothly and providing the advice and facilitating the resources for it to be a success.

Let us therefore come together once again in goodwill and forget our political differences, enjoying three weeks of sport as our young women and men make friends as they in turn come together in the Olympic Village surrounded by the Olympic spirit, which is one of sharing and smiling. One hopes it is genuine and not a cynical manipulation in the run-up to an attack on Syria, first and Iran, later.

Let us try to forget those who represent wars and intrusion and murder as they support terrorists to destabilise Governments so they can seize their resources or use their territory to install friendly regimes which will facilitate their strategic aims in future.

True, the politics has already started, with the Syrian Olympic Representative being barred from attending for no logical reason and true, the spectre of a possible false flag terrorist attack by those who wish to create a casus belli against Syria and Iran hangs over the games on the horizon. Would anyone put it past them? No, because it has been done before and no, because one cannot believe a word they say, especially after Libya.

Yet Humankind has to strive always to be better and to reach higher, to strive for goodness and for what is right, hoping that this quest will render those who practise evil as they follow their demonic agendas will one day meet their karma. So let us all enjoy these Games in the spirit of togetherness, friendship and fair play, which is what Sport should always be.