A great game of football with five goals started the matchday in Group B, between Denmark (2) and Portugal (3). What is wrong with Cristiano Ronaldo? He looks sad, he looks worried, he looks tired. Germany - two games, six points. However, nothing is decided yet in Group B. 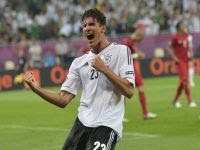 The first half was not for the faint-hearted or for cardiac patients. Denmark started more organised and did not let Portugal touch the ball, let alone play. In the first eight minutes the constant pressure led to four corners, Pepe showing what a competitive player he is all over the defensive area. Portugal started to grow after ten minutes and on 18' Cristiano Ronaldo found himself in a good position but heavily marked, shot wide.

24' 1-0. Pepe converted the corner brilliantly with a stunning header at the near post. 35' 2-0. Nani, excellent on the right flank, passed the ball to Helder Postiga iun front of goal and he slammed it into the top right-hand corner.

Denmark started concentrating on the game and tried to build, Eriksen trying a long shot low into the corner on 38', which Patrício saved; on 41', a cross from the right found Krohn-Dehli on the left, who headed across goal to Bendtner. 1-2.

At the end of the first half, a goalmouth mix-up involving Cristiano Ronaldo and Helder Postiga nearly resulted in Portugal's third. The second half promised, with just a goal separating the two teams.

And it produced the equaliser for Denmark, several opportunities for Portugal and in particular, for Cristiano Ronaldo, who does not appear to be at his best. He looks sad, he looks tired, he looks worried, although even without scoring his presence on the field preoccupies the opposing defence.

49' Ronaldo ran alone towards goal, allowing the Danish keeper Andersen to save; 57' Veloso sent a free kick from the right to Andersen; 62' Denmark threatened - Kvist shot inches wide from in front of goal and on 80', Bendtner equalised, heading in Lars Jacobsen's cross from the right.

81' Ronaldo alone in front of goal just to the right of the penalty spot with the keeper already committed, instead of pushing the ball forward, rounding the goalkeeper and tapping in, shot wide. There is something wrong with Cristiano Ronaldo, emotionally or physically. Portugal kept up the pressure and reflected some of the commitment Paulo bento has injected into the team - Silvestre Varela momentarily lost control of a cross from the left on 86', then seeing the ball was bouncing by his foot, had a second stab and the ball flew into the bottom right-hand corner of the goal.

Two powerful sides. The Netherlands scored 37 goals in the qualifying round, Germany scored 34. The Netherlands started strongly - Van Persie had a great chance on 6'; Ozil fired at Stekelenberg on 8'. The gauntlet was thrown down.

10' Robben found Van Persie at the entrance to the area, he shot wide. 18' Heitinga blocked Podolski's shot. 24' 1-0. Thomas Müller passed from the right inside to Schweinsteiger who threaded the ball through the Dutch defence to Gomez... who received the ball, turned and shot.

Second half. 52' The Dutch defence was static as Mats Hummels drifted in and had two stabs at goal, without result.

The Netherlands did not give up. 58' Van Persie had a shot at goal, 62' Sneijder shot just wide after an incursion from the left. 68' Robben shot wide from in front of goal; 70' Boateng blocked a goal bound shot with his body. 73' Van Persie made it 2-1. The game came alive, as the orange wave started flowing but Germany was just too organised to let anything happen, and before the end could have scored a third.

Denmark wins: Denmark through if Portugal loses or draws

Draw: Netherlands out; Portugal through if Germany wins or draws

Netherlands wins: Goal difference among the teams with three points

Russia wins: passes to next round

Draw: Russia passes to next round

Greece wins: passes to next round if Poland draws with the Czech Republic

Poland wins: passes to next round

Poland loses: Czechs pass to next round