And so ends the 2011-2012 UEFA competitions with Chelsea FC lifting the Champions League trophy after a magnificent win away at Bayern's Fussball Arena, Munich. After a monumental 120-minute game of football, it came down to penalties. Sadly, one team had to lose but Di Matteo, 41, gave Roman Abramovich the title he coveted. 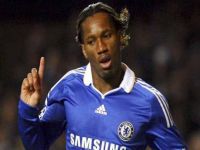 What a game of football, an unstoppable force and an immovable mass, Bayern launching attack after attack after attack against a resolute and solid Chelsea defence, until in the 80s came the two goals: first Bayern. Thomas Muller headed down and the ball bounced over Cech on 83' and Didier Drogba replied on 88'. 1-1.

In extra time, Drogba gave away a penalty but Cech defended brilliantly from Robben. And so the game went to penalties.

Lahm, the Bayern captain, scored the first for the home team and Mata answered for Chelsea in the worst possible way, seeing his shot saved and opening the floodgates of fears among the English fans that a German team was once again going to win on penalties. Gomes scored, 2-0. David Luiz rocketed the ball into the top of the net. 2-1.

Bastian Schweinsteiger skewed his well-placed shot against the post and pulled his shirt up around his face, knowing what was going to happen. It did. Didier Drogba scored the winner and Chelsea FC is the Champion of Europe for the first time in its history.

Drogba is the hero of the night, but let us spare a thought for Schweinsteiger. His tremendous contribution for his club and country is far more newsworthy than one penalty kick, as he will prove in the years to come. And now, how about giving a contract to Roberto di Matteo?

How they got there

In the semi-finals, Chelsea beat Barcelona 1-0 in London and drew 2-2 away, winning 3-2 on aggregate and arriving for the second time to the Champions League Final.

Bayern Munich won at home 2-1 against Real Madrid and lost away by the same result, drawing 3-3 on aggregate but winning on penalties.